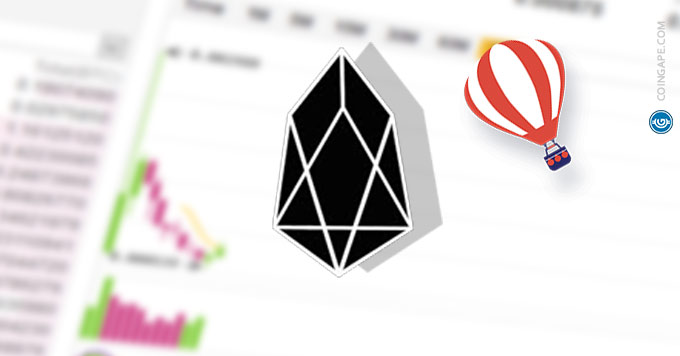 Cypher glass, one of the candidates for the EOS block producer, has announced the reward for supporting EOS tokens in the popular Ledger Nano S and Trezor wallets. In addition, Binance announced support for EOS air drops: IQ, DAC and EON.

Cypherglass, one of the block producer candidates at EOS, takes its role extremely seriously as it has announced the $ 100,000 reward for supporting EOS tokens in both Ledger Nano S and Trezor.

The EOSIO version of EOS by Block.One was released earlier this month, which is not yet online due to coordination issues. Another challenge was posed by two popular hardware wallets, Ledger Nano S and Trezor, that don’t support this new version.

Now the block producer Cypherglass has come to the rescue of the latter problem with a bounty. That bounty was split in half for each purse with a reward of $ 50,000.

In early May, Cypherglass announced its candidacy for the block producer when its CEO Rob Finch commented, “EOS is an exciting opportunity for the blockchain and general crypto community.”

The company has even partnered with DataBank to ensure the reliability and scalability of EOS Network, as per BusinessWire. With the aim of educating, supporting and expanding the EOS community through infrastructure development and community building, Cypherglass joined the top 21 block producers.

With that bounty, it has now caught the community’s attention as EOS enthusiasts shared their enthusiasm for Reddit with positive feelings for Cypherglass.

Redditor, Modernswan, stated, “I love it! I can’t wait to see updates on this topic. “

While another Redditor shared whizzer2: “Absolutely. They’ve been posting high quality stuff for a long time and it’s great. Easy to vote.”

“Cypherglass sets the standard for BPs (and they haven’t even been elected). To use your money where the mouth is to support the development of EOS. Cypherglass clearly has a vision and a sense of direction, but they also listen to and work for the EOS community. Cant wait to see Ledger Nanos and Trezor wallets connected to the EOS blockchain. “

Another piece of good news came from Binance when the popular crypto exchange announced that it would support the EOS Airdrops, IQ, DAC and EON.

On its official blog, Binance stated:

“Based on the feedback from our community, Binance would like to confirm its support for the following EOS Airdrops: IQ, DAC and EON. We invite these 3 project teams to send us an email at [email protected] to further discuss the Airdrop plan as well as the distribution details for Binance users. “

EOS is currently trading at $ 9.93, down about 11.69 percent in the last 24 hours. However, the entire market is in red right now, and there are some major downtrends going on right now.

What do you think of Cypherglass’ bounty pull and Binance’s support for EOS air drops? Let us know your thoughts!

Passionate about blockchain and has been researching and writing about blockchain technology for over a year. Also holds expertise in digital marketing. Follow me on Twitter at @ sagar2803 or reach out to him at sagar[at]coingape.com