A three-headed mess: Bitcoin Cash was headed for a messy tripartite division

Once a united front, the leadership of Bitcoin Cash has been fragmented into belligerent factions, and it seems that it is heading towards not one but two controversial forks.

In this one, we’ll review the history of Bitcoin, from the first hard fork to the details of the upcoming three-way split of Bitcoin Cash.

In January 2009, Bitcoin inventor Satoshi Nakamoto mined the first block of the Bitcoin network – the Genesis block. He has the following embedded in the block:

The late Hal Finney became the first recipient of Bitcoin when he received 10 BTC from Nakamoto.

On May 22, 2010, also known as “Bitcoin Pizza Day”, Laszlo Hanyecz exchanged 10,000 BTC for two pizzas from Papa John, which was the first Bitcoin transaction. To prove that something can be bought with it, Hanyecz published a suggestion in a forum.

Although Roger Ver is a controversial figure today, he was one of the most important people in the early days of Bitcoin. His company MemoryDealers.com was the first to accept Bitcoin. He also invested his money in other Bitcoin companies. His advocacy helped grow the Bitcoin network and his work earned him the nickname “Bitcoin Jesus”.

Another major player in increasing the value and interest in Bitcoin was the infamous Silk Road. Known for its many illegal products, the online marketplace was one of the few places where Bitcoin transactions took place regularly, and its many anonymous users contributed to the growth of the Bitcoin network. In early January it hit a new high of $ 1,100.

On October 12, 2013, Ross Ulbricht, founder and owner of the Silk Road, was arrested. The FBI seized 26,000 BTC, which it later auctioned. Although the Silk Road was necessary for Bitcoin’s growth, the shady transactions on the darknet are the reason cryptocurrencies are still linked to crime.

Mt. Gox was once the largest Bitcoin exchange in the world, handling over 70 percent of all transactions. In February 2014, it was reported that the exchange had lost around 850,000 BTC, nearly 7 percent of the total of 12.4 million BTC in circulation at the time.

The lost funds of nearly $ 500 million resulted in a 40 percent drop in BTC value from February to March. He ended the year trading in the mid-range of $ 300 after starting the year at $ 770.

In 2017, the big question about Bitcoin was how best to scale your network. With the goal of one day using Bitcoin for everyday transactions, its slow transaction speed was inevitably a major problem.

Increased blockchain would require more bandwidth and disk space, making it more expensive to run a node. With fewer nodes to verify a transaction, proponents of the larger blocks argued that the network would become more centralized.

Those who opposed increasing the block size advocated implementing SegWit. SegWit would increase the transactional ability by separating the transaction data from the signature and then compressing the signature so that more data can fit in the 1MB blocks. However, the fact that many of the developers who suggested SegWit worked for Blockstream aroused suspicion.

On May 23rd, at the 2017 Consensus, a group of companies signed an agreement to implement SegWit2x, a compromise between the two groups.

Despite the agreement, a hard fork occurred on August 1, 2017 that created two separate ledgers, Bitcoin (BTC) and Bitcoin Cash (BCH). Bitcoin Cash increased the block size from 1MB to 8MB and was endorsed by celebrities such as Roger Ver, Jihan Wu and Craig Wright.

The other chain, Bitcoin, implemented SegWit via a soft fork shortly after the split. The upcoming hard fork to SegWit2x was ultimately canceled. 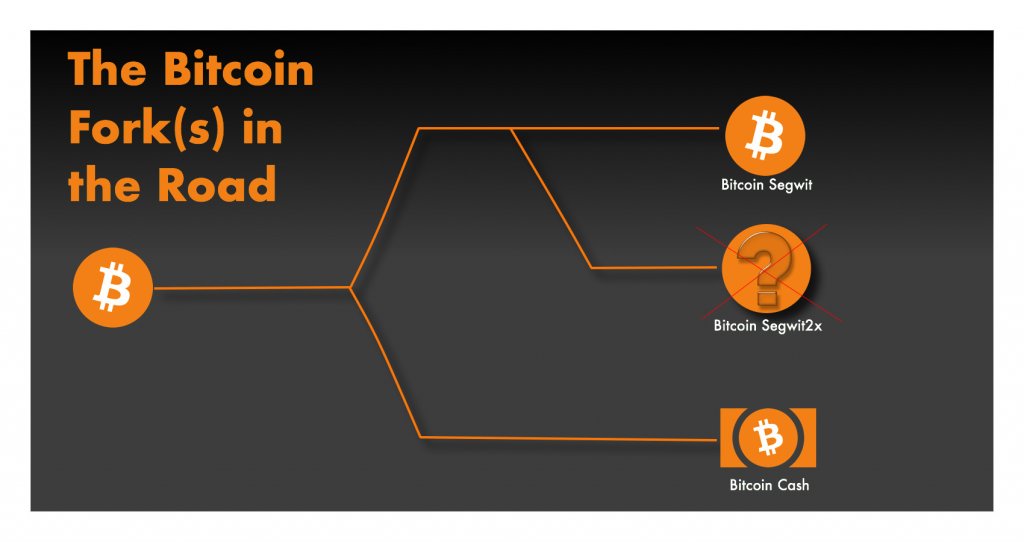 The fork between “Bitcoin Segwit” (BTC) and “Bitcoin Cash” (BCH) took place on August 1, 2017. Originally, BTC was supposed to go through another hard fork in November, but it was ultimately canceled.

Since the split, it has been a fierce battle between supporters of Bitcoin and Bitcoin Cash. Once the champion of Bitcoin, Ver has fought tenaciously to spread Bitcoin Cash as Nakamoto’s true vision. With their deep pockets, Wu and Ver have also been accused of manipulating the two markets.

While Bitcoin supporters are generally indifferent to BCH, with a small minority hoping it will eventually go to zero, Bitcoin Cash advocates hoping for a “flippening” in which users migrate to Bitcoin Cash and displace Bitcoin as the leading cryptocurrency.

Although Bitcoin Cash was once as high as 0.244 BTC, it has since fallen below 0.1 BTC. Compared to its all-time high, Bitcoin Cash has lost 88 percent of its value, while Bitcoin has fallen over 70 percent.

It is unclear whether Bitcoin Cash can bounce back to fill the gap with Bitcoin. Bloomberg reported that the number of providers using Bitcoin Cash has steadily declined and the negative press surrounding Bitmain’s IPO has largely focused on its huge but mostly illiquid BCH funds. It now also appears that Bitcoin Cash is headed for a hard fork.

A schism is beginning to grow between the leaders of Bitcoin Cash. It now seems more likely than not that there will be three different Bitcoin Cash chains. With the split, there is a dispute between two main factions – Bitcoin ABC and Bitcoin Cash Satoshi’s Vision (SV).

Bitcoin ABC is the team behind the original Bitcoin / Bitcoin cash fork. Wu and its $ 15 billion Bitmain are backing this fork.

You have completed the revisions to the current BCH code and are planning a hard fork on November 15, 2018. With your fork, the blocks will be 32MB and the consensus changes will include:

On the other hand, Calvin Ayre and Craig Wright have announced their plans to move towards the Bitcoin Cash Satoshi vision. BCH SV will not have the consensus changes planned by Bitcoin ABC and will have 128MB blocks.

It remains to be seen which faction will ultimately support Ver as he is a friend of all three.

These disagreements are significant given that Ayres Coingeek is responsible for over a third of Bitcoin Cash’s hash power, while Wright was a major figurehead of the BCH movement. The situation is made even more complicated with Bitmain’s upcoming IPO.

The two chains are incompatible and bad blood is already starting to spit.

Although the two groups currently disagree, there is still time to resolve their differences before the hard fork in November. From an outside perspective, it would make sense to compromise, as three BCH chains would weaken the hashing power of the resulting chain and reduce its chances of ever ousting Bitcoin.

Ethereum co-founder Vitalik Buterin disagrees, however. Instead, he sees it as the perfect opportunity to oust the self-proclaimed Nakamoto.

The BCH community should NOT compromise with Craig Wright in order to “avoid a split” and should use this as an opportunity to finally marginalize and reject him. Bitcoin Craig (BCC) can take over the ticker symbol of the now defunct cryptocurrency, for which it is a suitable successor.

While some Bitcoin Cash holders may not be sure which side to support, Bitcoin followers are enjoying the BCH battles to the fullest. It will be interesting to see what the final solution to this disagreement will be.

DASH Price Analysis: DASH Crypto could drop to $ 160 in this downtrend