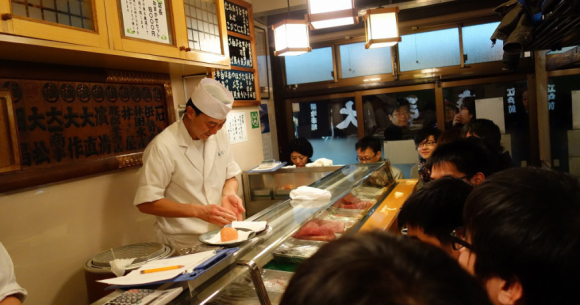 A portion of Tokyo’s world-famous Tsukiji Fish Market is expected to move to the Toyosu neighborhood in 2016. While part of the retail market and many restaurants will be sticking around, the upcoming relocation of the wholesale operations makes 2015 the last full year to enjoy Tsukiji as the absolute center of the sushi world.

In other words, if you’re looking to make a trip to the area to see it at its peak, now’s the time. And while there’s always something to be said for discovering a largely unknown restaurant with delicious food, on our Japanese-language correspondent Nakano’s visit to Tsukiji, he decided to dine at what travelers have voted the best sushi restaurant in Japan, Sushi Dai.

If you frequent travel website Trip Advisor, you might have heard of Sushi Dai before. In 2014, users picked it as the number-three restaurant in all of Japan, ahead of any other sushi establishment. It also topped the site’s poll for the same year of restaurants travelers were hoping to eat at when visiting the country.

Figuring the international travel community must be on to something, Nakano decided to experience Sushi Dai for himself. Since the freshest sushi comes in during the morning, he got up before sunrise on a Friday morning and made his way to Tsukiji.

Despite arriving at 5:30am, Nakano wasn’t the first hungry visitor. As a matter of fact, there was already a line of customers standing outside and waiting for a seat inside the tight quarters of the restaurant’s dining space.

Still, you can find a line in front of just about any reasonably well-known restaurant in Japan. If anything, with all the hype about Dai being the place for sushi, Nakano had actually been expecting more people…

…which is just what he found when he noticed the line actually stretched around the far corner of the approach to the restaurant.

While Trip Advisor has a Japanese website, it’s most popular overseas, which explains why more than 70 percent of the 50-strong line was made up of international travelers. With English, Chinese, and Spanish filling his ears, Nakano took up his spot at the back of the line.

One hour later, he hadn’t moved even a single step forward.

Then, finally, there was some movement. Still, standing outside in the cold of a January morning was making Nakano wonder if he was going to die of hypothermia before ever getting to taste Sushi Dai’s wares. Thankfully, while his empty stomach was producing such morbid thoughts, a woman came out from the restaurant with cups of steaming-hot green tea for those waiting in line.

▼ While sipping his tea, Nakano still had plenty of time to appreciate the calligraphy of the Sushi Dai sign.

Thankfully, Nakano’s wait didn’t end up being as long as many of the others in line. Since he was dining alone and Sushi Dai only has counter seating, he got to skip ahead of the parties with multiple diners, and after two hours, he was finally ushered inside.

▼ In keeping with its popularity with foreign visitors, Sushi Dai has an English menu.

Customers can choose from a 2,600-yen (US$22) nigiri set, or a more expensive 4,000-yen course which includes sushi rolls as well. Since he’d come this far, Nakano decided to splurge on the pricier option, which kicked off with a piece of otoro (extra fatty tuna).

Otoro is one of the most decadent types of sushi, so Nakano figured he was in for a treat. He popped the morsel into his mouth, and it was beyond even what he’d expected in buttery goodness.

Nakano’s gourmet breakfast was just getting started, though. Next up was kinmedai (sea bream), with its red hue stimulating our writer’s appetite.

Midwinter is held to be the best season for buri (yellowtail), since the fish fattening up against the cold imparts a richer flavor.

Don’t let the name scare you. Horse mackerel, or aji in Japanese, is actually a fish, and a tasty one at that.

Like otoro, uni (sea urchin) is another premium sushi variety.

While it often plays second fiddle to the world-class fish Tsukiji has to offer, eggs are another specialty of the market.

The chef placed piece after piece of mouth-watering sushi in front of Nakano, who felt himself getting fuller and fuller, but with no corresponding loss of appetite for the scrumptious fare.

All good meals must come to an end, though. Eventually, it was time for the final act, and the good-natured chef asked Nakano what kind of sushi he’d like to close out the meal. Ever the gourmand, Nakano asked for kawahagi (filefish), served with the liver atop the fish, and he was not disappointed with the result.

In the end, Sushi Dai definitely lives up to its reputation as an outstanding place for sushi. In terms of flavor, it can hold its own with restaurants costing two or three times as much, and the kindhearted staff are a definite plus for those turned off by stern, stone-faced sushi outfits.

On the downside, there’s that incredibly long wait. While Nakano lucked out and snagged a seat after two hours in line, having to stand around for four or even five hours isn’t unheard of at Sushi Dai. Also, if you’re the shy type, you should know that since the restaurant has essentially become a sightseeing attraction, you will almost definitely be showing up in the background of other people’s vacation photos as you eat.

Still, as an overall experience, a visit to Sushi Dai is really something you owe yourself if you’ve got a love for sushi. As Nakano stepped out of the restaurant, he saw the line had grown to roughly 100 people, but the memory of dining at Tsukiji’s best-loved restaurant during the neighborhood’s golden era will last a lot longer than the wait to get in.