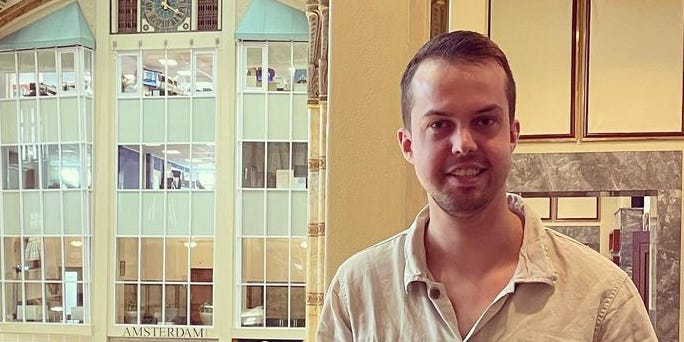 “I don’t think Cathie Wood is forecasting $ 500,000, it’s kind of ridiculous,” he said in a recent interview with Insider. “$ 500,000 would bring Bitcoin close to gold in market capitalization, it just doesn’t make sense.”

At this week’s SALT conference, star stock picker Wood said she expected Bitcoin to hit $ 500,000 in five years. She also told CNBC anchor Andrew Ross Sorkin that her firm Ark Invest is stepping up its commitment to ether.

Van de Poppe has been trading crypto for four years and recently founded the consulting and education platform Eight Global. He runs a 12-man company based in Amsterdam.

“One of my best friends showed me Coinmarketcap in 2017,” he said. “I started trading crypto, made a lot of mistakes, but got interested in Bitcoin and what it actually represented.”

“When I read the Bitcoin whitepaper, I thought this was going to be big and went down the rabbit hole,” he added.

Van de Poppe told Insiders why he believes Bitcoin will hit $ 300,000 in the first half of 2022, how long he thinks the bull cycle can last, and what price signals he is watching.

Van de Poppe said he based his price prediction of $ 300,000 on the anonymous analyst Plan B’s stock-to-flow model, which compares the amount of bitcoin in circulation to its rate of production.

Bull market
takes another six to nine months. However, he warned that this bull run would be different from others.

According to van de Poppe, the increased involvement of institutional investors combined with the 65% price hike this year will increase the role of external factors and reduce the impact of “halving”. Halving refers to when the reward for mining Bitcoin is cut in half, roughly every four years.

“We have the four-year cycle, the halving phase, but the larger the market, the less the impact of the halving on the price,” van de Poppe told Insider. “On the other hand, the effects of macroeconomics will be stronger as the market gets bigger – the Fed or the European Central Bank could both start to influence the market.”

At the SALT conference, Cathie Wood said she believes the price of Bitcoin will soar to $ 500,000.


Price signals to look at

After his training as an economist, van de Poppe’s advantage lies in the analysis of crypto prices instead of making technical assessments of the potential uses of a coin. He told Insider that he was looking at four metrics in particular.

“My core business is in Price action“he said.” It’s the easiest approach you can take. “

Price action is the movement of the price of a security over time. Traders develop price action charts to identify and interpret trends; van de Poppe posts a fair amount of this type of technical analysis on his 400,000 follower Twitter account.

van de Poppe said he was combining this quantitative analysis with the ongoing analysis of Basic sentiment of the market.

“When bitcoin is at $ 30,000 and people think it’s $ 20,000 guaranteed so they try to sell, that gives you a massive buy signal,” he added, describing a contrarian investment strategy.

Van de Poppe also told Insider that he was working on integration On-chain analysis in his research.

This is what happens when price analysts use the public ledger of a crypto asset to create and investigate a financial record. On-chain analysts try to determine the fundamental rather than the speculative value of a blockchain.

Some capital managers argue that the Bitcoins Golden Cross took place on September 14th as the short-term price average outperformed the long-term price average. However, Van de Poppe cautioned investors not to be overly optimistic on this price signal.

“The golden cross is a signal that we may get back into a boom cycle, but it’s never guaranteed,” he said. “But the fact that some dealers are using it makes it important to have some understanding.”

“We had a death cross earlier this year, but the market has risen again,” he added. “I don’t use the flanks too often because it can be quite difficult to develop a strategy around them.”

Whichever strategy he chooses, it is clear that van de Poppe plans to stay active in the crypto space for a long time.

“Crypto is my life, it’s my passion,” he told Insider. “My friends don’t call me Michaël anymore, they call me crypto-Michael.”

Altair Network is the 10th Parachain to join the Kusama Network