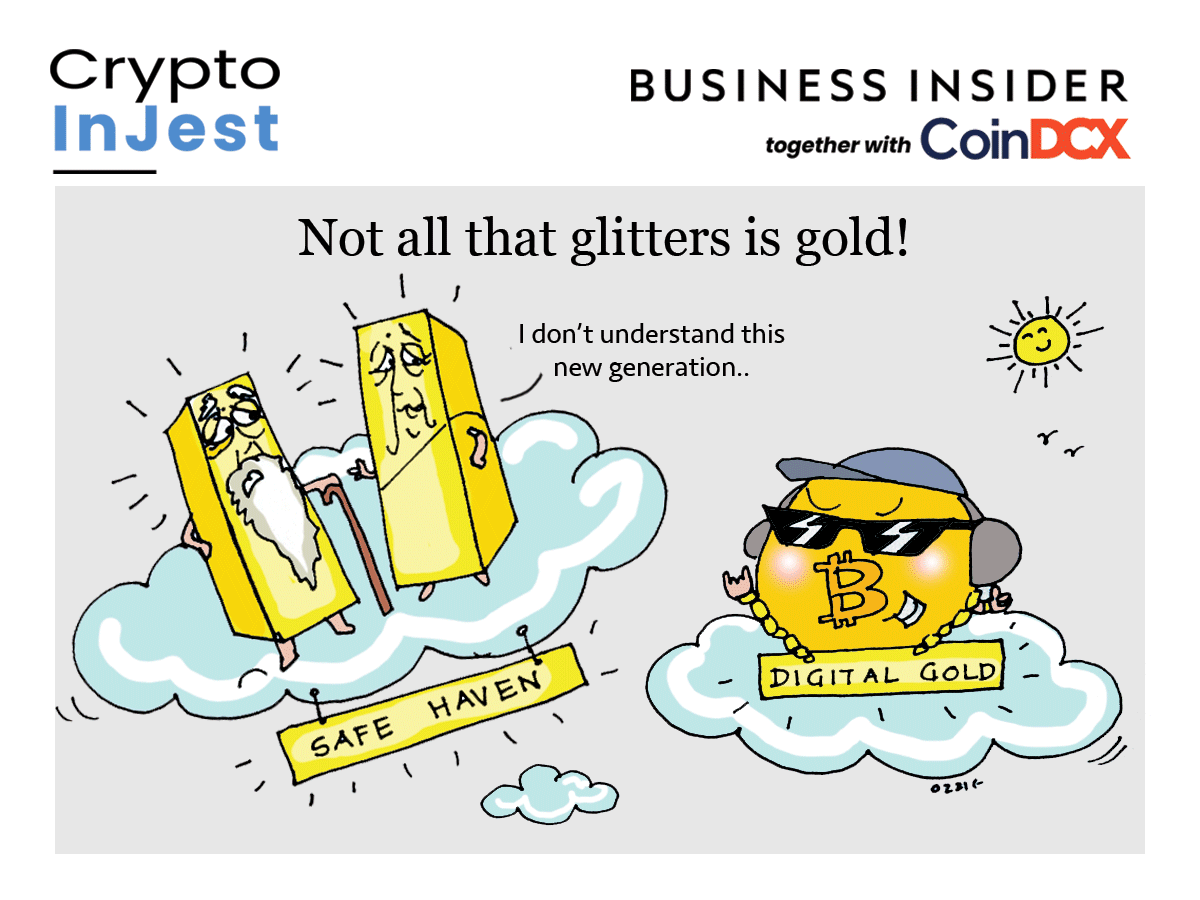 One of the biggest arguments for Bitcoin is the “digital gold” – a hedge against rising prices or inflation.

“There are preliminary signs that the earlier shift away from gold to Bitcoin that was observed during most of the fourth quarter of 2020 and early 2021 has resurfaced in recent weeks.”

As an example of a price spike, India’s Central Statistics Office reports that milk price has increased 47.3% in the eight years since 2012, despite milk production increasing 47% over the same period. The supply has increased, but so have the costs.

You can also see rising prices of goods almost everywhere. Economists say much of this is simply due to the fact that the “purchasing power” of money – like the Indian rupee – declines over time and is tolerated as a necessary evil to stimulate the overall economy.

However, it is claimed that Bitcoin-denominated prices are able to reverse this trend and thus help the currency to maintain its value. “Institutional investors seem to be returning to Bitcoin and may see it as better inflation protection than gold,” said US investment banking giant JP Morgan Chase in a statement to investors.

Everyone is in a race to defeat inflation

Since inflation drives spending, it means that the fiat money in your hand or bank account will depreciate in value until it is invested to generate returns.
In 1973, one US dollar could be exchanged for eight Indian rupees, but in 2021 the exchange rate will be almost ten times as high as can be seen in the graph below. During the pandemic, one of the main concerns was that even interest on fixed-term deposits (FDs) could not beat the rate of inflation.

This cycle of inflation explains why a loaf of bread costs much more today than it used to be. The falling value of fiat money determines most investment decisions. You want high returns to keep up with price inflation, you expect returns to keep rising until retirement, and so on.


When a national currency is used, inflation is inevitable in a growing economy. It helps because the more money there is in the economy, the higher the demand for goods and services. This benefits workers with rising incomes, but certain profiles of people such as students and retirees – those with fixed incomes – are negatively affected.

In theory, one way to prevent continuously rising prices is to use a currency that “maintains” its value – like the gold standard. That will result in ten rupees buying the same amount of goods, whether today or ten years later.

However, such a system proved imperfect as it suppressed economic growth and trade in goods, among other things. The task of maintaining value is therefore now left to the assets and investments.

Can Bitcoin be a “reserve” currency?

There is a limited supply of Bitcoin – some like gold. Additionally, the price of bitcoins has risen faster than other financial instruments in recent years, fast enough to hold the value of money and more. That makes social media enthusiasts wonder if Bitcoin is a preferred investment. If you tracked it for over a decade, Bitcoin actually made profits for those who held it for a long time. Changes enforced by its built-in protocols such as “halving” are also expected to add to its value. So, listing part of the assets in this cryptocurrency could mean gains that offset likely losses in other areas of a person’s investment portfolio.

In fact, large institutional investors and wealthy corporations have been slowly buying it and reporting it on balance sheets as part of assets held. In the case of MicroStrategy, even a decrease in primary income earned turned out to be insignificant as the increased value of Bitcoin assets added a billion dollars to its balance sheet.

Is Bitcoin-ing the World Desirable?

As with any early adopter, staying ahead of the curve when buying this cryptocurrency could help – until enough people hold Bitcoin as an asset that can be used as currency for goods and services. After that, people could widely use it for transactions like normal currency, potentially stabilizing its value.


At the moment, however, the dollar value of Bitcoin continues to fluctuate widely, at a rate of three percent between morning and evening of the same day. That can be an opportunity or a risk depending on whether you are selling or buying the currency.

Some titans of the conventional financial system have insisted that bitcoin is a fad, equating bitcoin with the tulip mania bubble of the 17th century.

Existing real world conditions could teach crypto enthusiasts a lesson. Japan has had almost no inflation in two decades – a dream of any cryptocurrency enthusiast – but that hasn’t helped the Japanese much. El Salvador has officially welcomed Bitcoin for everyday transactions, yet there have been a number of protests against the move.

Some enthusiasts even consider Bitcoin to be deflationary tendencies, where goods can cost less in Bitcoin terms. Because such a cycle could further reduce prices, wages and production, with catastrophic consequences for people. Hence, most economists today advise avoiding such a path of deliberate deflation, although with Bitcoin it could still develop in unforeseen, innovative ways.

Those who believed in Bitcoin and stayed – the HODLers – saw extraordinary returns, like Michael Saylor’s IT company MicroStrategy.

Bitcoin’s rise in recent years suggests that for a person or institution it could be treated as a different type of asset that fulfills the role of diversifying investments. He could then try to offset negative movements in other asset classes.

If dreams come true, in the next decade we could shop on Amazon or order from Zomato by paying in bitcoins and satoshis (one satoshi is equal to 0.00000001 of a single bitcoin). It could be exciting indeed – imagine using a decentralized, global, stable, and accurate, highly divisible digital currency; hopefully without the drawbacks we discussed earlier.

SEE ALSO:
Cryptocurrency Investing 101 – How To Do Your Own Research (DYOR) And Invest In The Right Digital Asset

The first upgrade from Ethereum 2.0 will take place this month – one step closer to reducing the competitive advantage of “Ethereum Killers”

Ethereum holds vital support which could trigger a sharp rally