BitTorrent (BTT) is the new bull in the cryptocurrency market that creates ATH three times in one month. In a market that is moderate to bearish and volatile, the BTT price is making new highs. In contrast to other currencies, the token also holds the higher levels. Its new ATH is $ 0.005537.

The price of BitTorrent tokens (BTT) only moved in February and has been consolidated since then. But after it erupted, it has continuously maintained its bull level. BTT price rose from $ 0.0039 to $ 0.005537 on March 31, increasing 26.19%. It is also the ATH level of the currency. 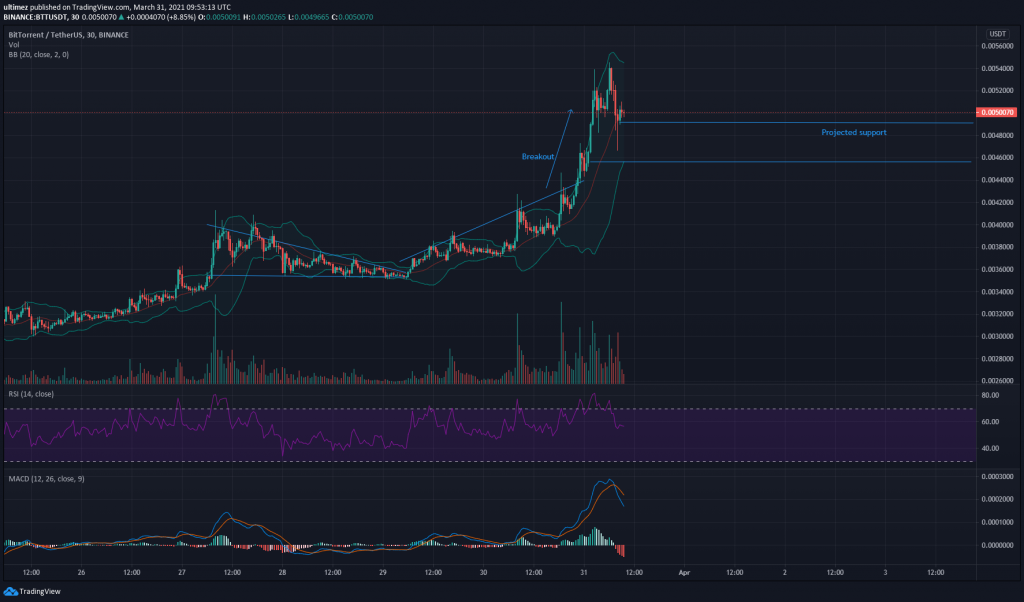 The 30 minute and monthly charts show that consolidation has started after the big jump and appears to be bullish. It is obvious that after taking a sharp step, the HODLers want to make a profit. This will consolidate for some time before the market sets the direction of the trends.

Resistance support levels failed to sustain breakout prices. Although the bears tried to manipulate prices to break out on the upper sides of the resistance, they proved they were wrong.

The RSI levels topped 80 indicating an overbought zone, but they are currently at a healthy 55 levels. MACD is also showing bullish momentum as it rallies. This is a clear indication that if the currency stays above $ 0.0037 for the next week, upward momentum will follow.

The Fibonacci charts indicate the consolidation level at 0.618 and therefore serve as a buy level for investors. It can also be seen how investors react to this surge as many of the long-time investors may be making gains.