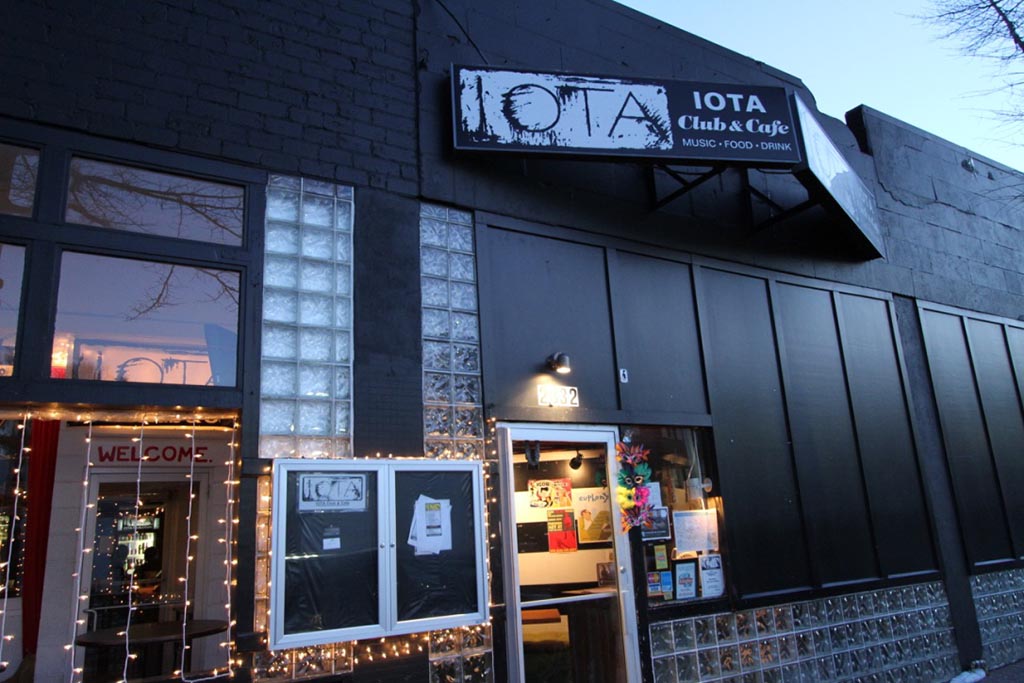 (Updated at 9:25 am) Arlington’s most active live music venue is closing its doors this month.

The owners of the IOTA Club and Cafe in Clarendon announced this morning that they have decided to close after 23.5 years in business. The rental contract for the venue ends after September 30th, the last business day of IOTA.

Despite a “Save IOTA” campaign earlier this year, Market Common Clarendon owner, Regency Centers, is pursuing a plan to remodel the retail and office development, including the IOTA space along Wilson Blvd. IOTA called the changes “urgently needed building repairs and improvements”.

In a press release, IOTA owners Jane Negrey Inge and Stephen V. Negrey said that while the Regency Centers tried to find accommodation, they ultimately made the difficult decision to close the club rather than temporarily relocating during renovations and withdrawing pay higher rents.

IOTA will host concerts tonight and tomorrow from 8 p.m. to raise money for the Red Cross hurricane relief efforts. Currently, the last item on IOTA’s performance calendar is an open mic night on Wednesday September 27th for September 30th, but details are not yet known.

“Regard [our] Website and social media for announcements, ”Inge said.

More from the press release:

The main task of IOTA Club & Cafe has been LIVE MUSIC for 23 and a half years. IOTA has featured some of the most creative and talented musicians from across America, including many emerging stars and dedicated artists who are into and / or make a living in music. IOTA has also hosted acts from Canada, Mongolia, England, Ireland, Scotland, Japan, Niger, China, the Scandinavian countries and others. IOTA’s top priority has always been to find ornate, original and creative live music experiences. Additionally, IOTA has featured catalytic bands and, to a lesser extent, DJs, all of which put on good shows for a good time for the people.

Owners Jane Negrey Inge and Stephen V. Negrey believe they have made a contribution to their hometown of Arlington, Virginia through their dedication to live music and hard work in the restaurant and bar business, the mainstay of the company. They believe creative and engaging options for consumers improve communities. They see their longstanding struggle for IOTA’s life as worthwhile and culminate in a triumph of arts and entertainment by independent small businesses.

The countless performances and the participation of local artist-musicians in the DC Metro Area have brought joy and good times to many thousands and carried IOTA. Jane and Stephen are especially grateful to these musicians, in addition to the tour musicians who have inspired and entertained so many.

Regency Centers, the new owner / developer of Market Common Retail (since 2016 owner of the space on Wilson Boulevard rented by IOTA since 1993), has announced plans to improve the block to make room for tenants at current market levels. The Regency Centers kindly offered IOTA Jane and Stephen a six-month rental extension at rock-bottom rents through September 30th so they can review their situation. They found that they couldn’t afford to attend due to the cost of moving temporarily, badly needed building repairs and improvements, and new higher rents. Plus, IOTA’s beloved and irreplaceable ice cream maker, the Hoshizaki KM-630MAF, is about to bite the dust!

The support from hundreds of SAVE IOTA attendees has been amazing. Jane and Stephen didn’t want to let these IOTA fans down and hope they will watch the website and social media for upcoming events and other opportunities that Jane and Stephen hope to support LIVE MUSIC in the future and continue to participate in art activities .

Jane and Stephen are grateful for the financial and other support from friends and family that IOTA has helped establish since March 15, 1994, 9:30 Club and most importantly The Birchmere. It was an honor to share the path with these great independent companies that rock in the free world where people really enjoy live music, the power, the art and the fun of it and the community and community that she creates.