Cardano’s creator strikes back what he calls a “massive FUD storm” that is ongoing before the Alonzo upgrade is fully rolled out.

On Twitter, Hoskinson – who co-founded Ethereum before later launching ADA in 2017 and now developing it full-time – wrote why the Cardano Fear, Uncertainty, and Doubt (FUD) is expected.

Charles Hoskinson apparently responded to explosive reports on Twitter from Ethhub.io co-founder Anthony Sassano, who said, among other things, that Cardano was broken and that fans of crypto realized that “you can’t check your path through peer reviews.” fundamental questions “.

On the Twitter thread, Sassano justified his pessimistic stance on ADA, claiming that despite six years of peer-reviewed research, the first dApp to launch on the coin failed to perform concurrent transaction processing – the fundamental function required to support DeFi Market capitalization of over $ 90 billion.

He went on to argue that Cardano was the “biggest joke” in the cryptocurrency industry while making fun of the fact that the network’s scientists are working hard to deal with the current issues that plague it.

Other critics also claimed that Cardano’s dApp could only process one transaction per block, which, oddly enough, they called “Unoswap”. Another user posted on Reddit, “Looks good. But when I try to swap things I just get ‘Transaction Failed: UTxOs are used in this block. Please wait 20-40 seconds and try again. ‘”

In response to this and other criticisms, Hoskinson argued that the team saw the same FUD storm last year with the Shelley update, and therefore is nothing new. He went on to explain that the backlash comes from people trying to “burn down” developments they “don’t understand or feel threatened by”.

Alonzo is scheduled to start on September 12th. Hoskinson expects this to be a big day for Cardano, but it’s only one day on a long journey.

“As expected, a massive FUD storm is afoot. We saw the same thing with Shelley last year. It is nothing new. Only people who want to burn down what they don’t understand or what they feel threatened by. September 12th is a big day, but only one day on a long journey that we are all on together. “

Input Output, the leading research and development company behind Cardano, also came out to clarify the FUD regarding the UTxO transactions. In a blog post, IOHK said that Cardano will be able to process multiple transactions at the same time, not just a single transaction per block.

After ADA has registered a supernatural boom in the past few months, ADA is now reversing. 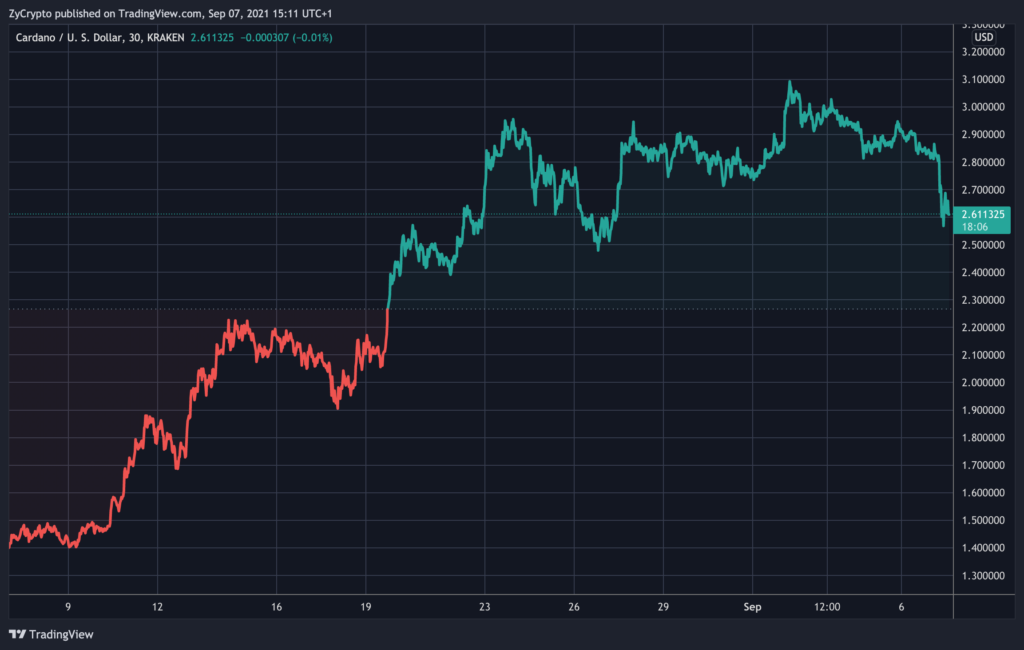 Currently, Cardano is the third largest cryptocurrency with a market cap in circulation of $ 84.88 billion. ADA is trading at $ 2.65, a significant drop from the coin’s recent high above $ 3, announced shortly after the September 1 announcement that the network’s public test network would support smart contracts . The cryptocurrency has destroyed 8.73 percent of its value in the past 24 hours.

Why XRP will lead the beleaguered Bitcoin