Clearing Up Misconceptions: This Is How Tether Should (and Does) Work 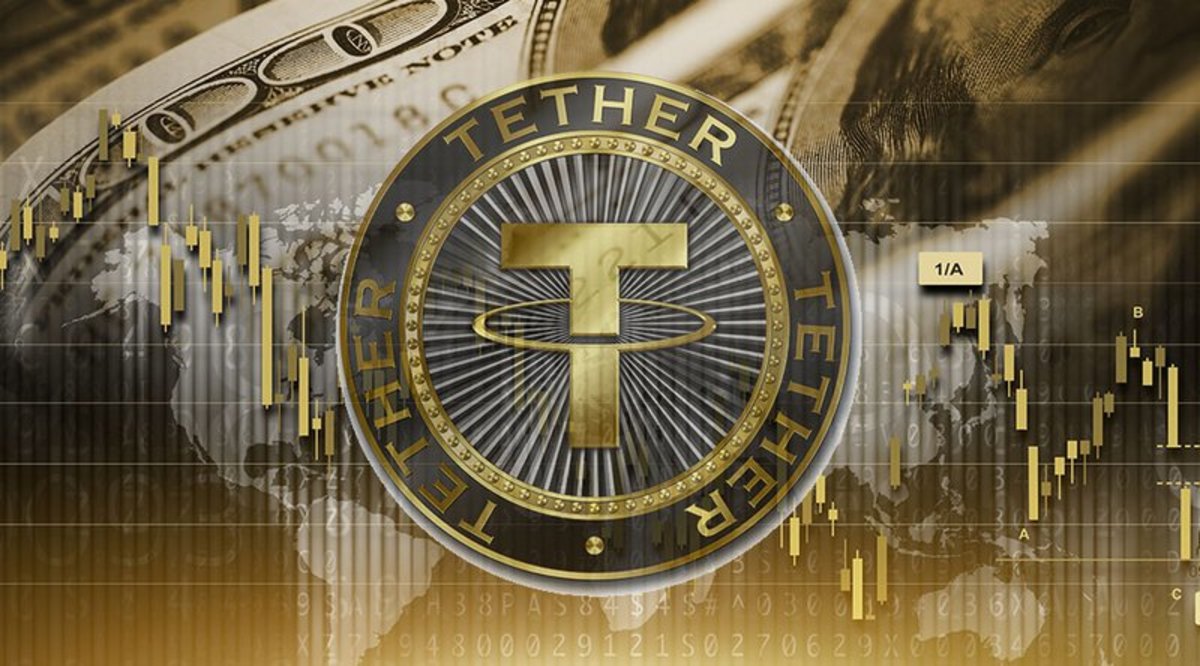 Whereas most cryptocurrencies have a finite supply of tokens, Tether does not. According to Tether’s white paper, new Tether tokens can be issued when customers buy tokens by depositing the underlying fiat currency — U.S. dollars or Euros — in Tether’s bank account. However, it is not currently possible to register at Tether; in fact, registrations have been closed since December 2017. During this time, the amount of Tether tokens more than doubled, peaking at 2.5 billion tokens at the time of writing.

For Tether to function as a so-called stablecoin, each Tether token — trading under the ticker USDT — has to be backed by one U.S. dollar. Tether, therefore, needs to hold the underlying fiat of all Tether tokens in their reserve. In their white paper, Tether promised to deliver regular audits to show Tether holds the necessary funds in reserve, but the company has not delivered a complete audit since March 2017. Tether published an audit in September 2017, but the document is an internal memo issued by Friedman LLP, their auditor at the time. No further audit is expected anytime soon as the relationship with Friedman LLP was dissolved in January 2018 and Tether has not yet obtained a new auditor.

The Paradise papers showed that Tether and Bitfinex, one of the largest cryptocurrency exchanges, are run by the same management team. Bitfinex has been accused of propping up the price of bitcoin through issuing Tether tokens to buy bitcoins. Whenever Bitfinex’s wallet ran out of Tether tokens, new tokens would be issued.

In January, a report posted anonymously online showed that the price of bitcoin mostly went up in the hours after new Tether tokens were issued and sent to the Bitfinex wallet. The report furthermore concluded that it is highly unlikely that Tether is growing through any organic business process, but that Tether tokens are printed in response to market movements in order to be used to buy bitcoin and, thereby, increase its price.

In an academic paper published on June 13, 2018, John Griffin and Amin Shams, both associated with the University of Texas, analyzed both Tether and Bitcoin blockchain data to determine whether Tether tokens were issued following market demand or were instead pushed onto the market. Their results suggest that Tether tokens are used to support certain thresholds — a price floor — for bitcoin when prices are falling, stabilizing bitcoin’s price.

These new, large Tether issuances in round numbers moving to Bitfinex have, in part, drawn suspicion. Since Tether registrations are closed and all Tether tokens issued are transferred to Bitfinex’s wallet, the issuance of Tether tokens in round numbers makes it unlikely that these are direct purchases by customers of Tether. Questions have, therefore, been raised asking who could realistically be behind these issuances.

Based on analysis of the issuance and movement of Tether tokens, the answer is that there is currently only one possible customer, in the sense of how the word “customer” is used in Tether’s white paper: Bitfinex.

Paolo Ardoino, Bitfinex’s chief technology officer, confirmed in an interview that Bitfinex is a direct customer of Tether and is currently the only gateway in and out of Tether. According to Ardoino, Bitfinex and Tether decided on this change in late 2017 to put less strain on the banks processing Tether purchases. Ardoino added that the company’s plan is to offer more gateways to Tether — suggesting up to 20 — in the near future. To establish these gateways, Tether is expected to hire a new chief compliance officer to oversee Tether’s compliance program, including its due diligence procedures for onboarding new customers.

The implication of Tether tokens only being purchasable at Bitfinex is that the two entities are further intertwined than previously understood: Besides the fact that Tether and Bitfinex are run by the same management team, Tether would not be able to function as it currently is without Bitfinex serving as its gateway to fiat deposits and withdrawals.

For Bitfinex to function as this gateway, however, it needs access to fiat banking itself. In March of 2017, Wells Fargo ended its relationship as a correspondent bank to Bitfinex and Tether. Bitfinex has kept details of its banking relationships a closely guarded secret ever since — a lack of transparency that has further fueled the controversy surrounding Bitfinex and Tether.

Access to fiat banking is necessary for Bitfinex in order to offer its users U.S. dollar trading. Ardoino confirmed that all balances and USD trading pairs on Bitfinex are in U.S. dollars (USD) instead of in Tether tokens (USDT) and that the dollars and Tether tokens are not mixed together.

Verified Bitfinex users are thus credited with U.S. dollars on Bitfinex when making deposits. Users can use their U.S. dollars when choosing Tether as a withdrawal option. In doing so, they purchase Tether tokens from Bitfinex. 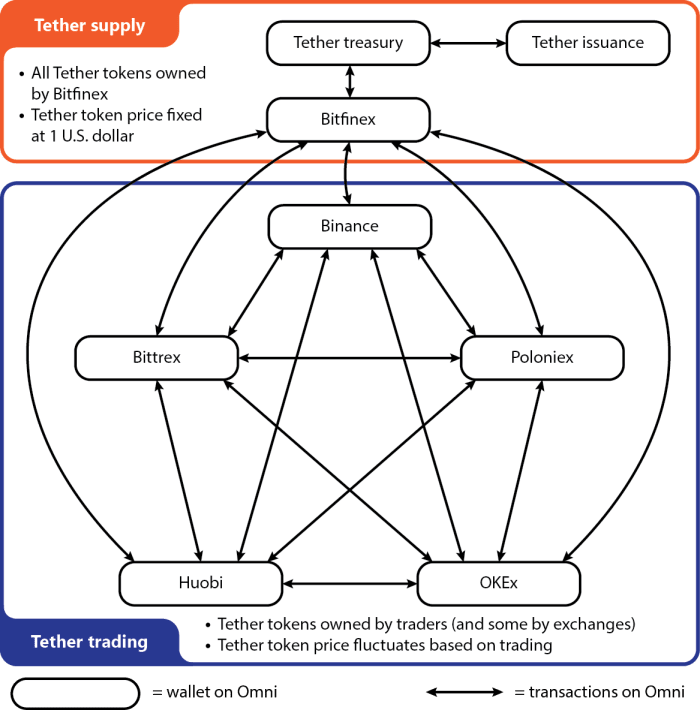 Given each Tether token is offered for and credited with one U.S. dollar on Bitfinex, why does the price of Tether show fluctuations? For example, Coinmarketcap and investing.com offer charts that show Tether’s price (USDT) fluctuating around one U.S. dollar. Investing.com explained that their “Tether index” chart is based Kraken’s and EXMO’s USD/USDT trading pairs. Coinmarketcap did not respond to a request to explain what data is used to create their graph.

The fact that Bitfinex always values one Tether token at one U.S. dollar probably explains why the USDT/USD trading pairs hardly ever fluctuate far from one U.S. dollar. Whenever the price on the trading pair drops to 98 cents, for example, arbitrage traders — verified on Bitfinex — can buy tokens at 98 cents and deposit them to Bitfinex to be credited one U.S. dollar.

Bitfinex’s function as the gateway to Tether sheds light on how the use of Tether creates revenue for Bitfinex. For other exchanges supporting Tether, Tether is an important source of liquidity as the exchanges do not offer direct fiat withdrawals or deposits. In a way, Bitfinex functions as the fiat withdrawal and deposit gateway for these exchanges, although only for verified users.

The only source of “revenue” generated by Tether itself is the interest gained on the U.S. dollars held in its reserve. The U.S. dollars backing the Tether tokens are stored in a full reserve bank account, with recentreports suggesting that they are being held at the Noble Bank in Puerto Rico. According to Ardoino, the interest gained on the reserve covers Tether’s expenses while also leaving room to invest in improving Tether’s structure, marketing and compliance program.

In turn, the existence of a full reserve determines whether or not each token should be valued at one dollar; that is, whether all Tether tokens are actually backed by U.S. dollars. If Tether is instead functioning on a fractional reserve, a bank-run on Bitfinex — wherein users deposit back large amounts of Tether tokens at the same time — would crash the price of Tether.

Although recent reporting suggests at least a large amount of the dollars are stored at the Noble Bank, only an independent audit — as promised in Tether’s white paper — can prove that all the U.S. dollars purported to be backing Tether exist.

When asked about the lack of audits, Ardoino acknowledged that an independent audit is needed to prove the existence of the full reserve to the community. “What we want to do is not [audit] the bank balances as of now, but we want to demonstrate to the community that we had the money at the end of every single month, since a reasonable date like January 2017 and on.” He added that talks are ongoing to find a new auditor.

However, this may not be enough to prove Tether was always fully backed. In their paper, Griffin and Shams analyzed whether it is possible that Tether only maintained a full reserve at the end of the month. If true, a coinciding decline of the price of bitcoin could also be expected at the end of each month to create the necessary reserve in U.S. dollars. Their analysis shows that the price of bitcoin did indeed show large declines at the end of every month in which a large amount of new Tether tokens were issued. This correlation seems to suggest that these declines in bitcoin’s price may have been related to Bitfinex’s need to raise reserves at the end of those months.

Although some misconceptions regarding Tether are addressed in this article by analyzing how Tether works, it is likely that the controversy surrounding Tether will continue until Tether and Bitfinex provide full transparency and independent, conclusive audits.