The two largest publicly available crypto trading platforms in America and Asia, Coinbase and Binance, also have the largest exposure to Tethers, a synthetic form of USD that is being introduced into the crypto trading markets to provide liquidity.

This is the conclusion of CoinMetrics, a blockchain data analytics company, which recently completed an analysis “How the trading volume of Bitcoin and Tether in … nine Bitcoin-US dollar (BTC-USD) markets and nine Bitcoin Tether ( BTC- USDT) markets. “

These and other analyzes are available through the company’s newsletter.

The data presented in charts by CoinMetrics ranges from April 1, 2019 to the present day.

In addition, the diagram provided shows “the volume of the Bitcoin US dollar markets by exchange, the volume being defined as hourly units of Bitcoin, smoothed with a 7-day moving average”.

It should be noted that there is a significant amount of tethered action going on in OTC markets and therefore not shown in CoinMetrics’ current analysis.

According to the company:

“The majority of (public tether) trading takes place on Coinbase, Bitfinex, Bitstamp and Kraken. Overall, these four exchanges account for around 85 percent of the total Bitcoin US dollar volume traded. The remaining exchanges, including Gemini, itBit and Bittrex, each have volumes an order of magnitude lower than those of Coinbase, the leading exchange. “ 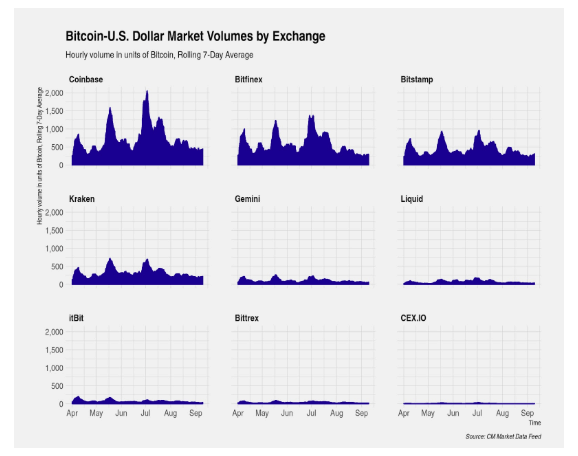 “Coinbase has gradually increased its market share from 24 percent to 32 percent during this period, with the share mainly being taken over by Bitfinex, which fell from 25 percent to 19 percent. Bitfinex’s decline in market share is understandable given the longstanding problems with timely withdrawals and a tightened regulatory environment. “

CoinMetrics also expects Coinbase to add US traders who have been expelled from offshore platforms and are increasingly cautious about not breaking the US SEC:

“As more exchanges restrict access to US traders, we expect more trading activity to focus on Coinbase, the primary Bitcoin US dollar market.”

Notably, tether-to-bitcoin trades on Binance are twice as extensive as USD-to-tether trades on Coinbase: 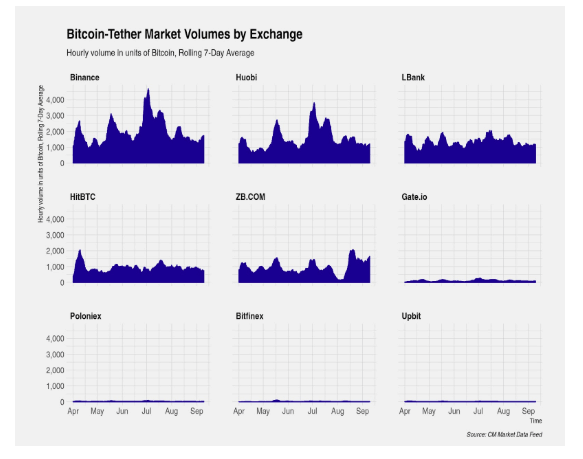 Professor John Griffin and others have Bitfinex et al. accused of using tether to prop up the price of bitcoins at strategic moments.

The coin is also believed to have been used to manipulate the price of smaller capitalization cryptos.