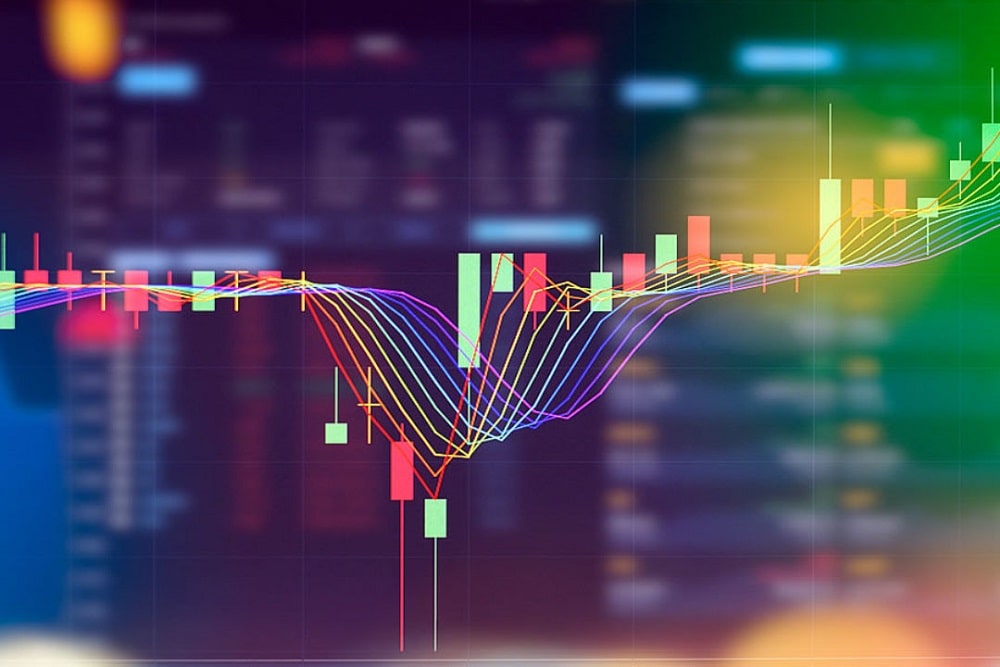 Cryptocurrencies like Cardano (ADA), TRON (TRX) and Monero (XMR) have made positive moves and are benefiting from the bear market. Most of the time, these coins have to overcome minor resistances in order to advance. However, Stellar (XLM) and Ethereum Classic (ETC) are trending sideways.

Stellar has been sideways for six months and failed to break resistance at $ 0.090. The ETC’s upward move was short-lived as the bulls and bears battle for a price below the $ 13 resistance.

The bulls will continue their upward move to $ 0.090 with current momentum. Nonetheless, due to Relative Strength Index period 14, level 79, the move up is dubious. This suggests that ADA is trading in the overbought area of ​​the market. The purchase is an exaggeration. Sellers are generated in the region in the absence of buyers to push Cardano down. ADA could fall and find support at $ 0.065 before resuming the upside move. 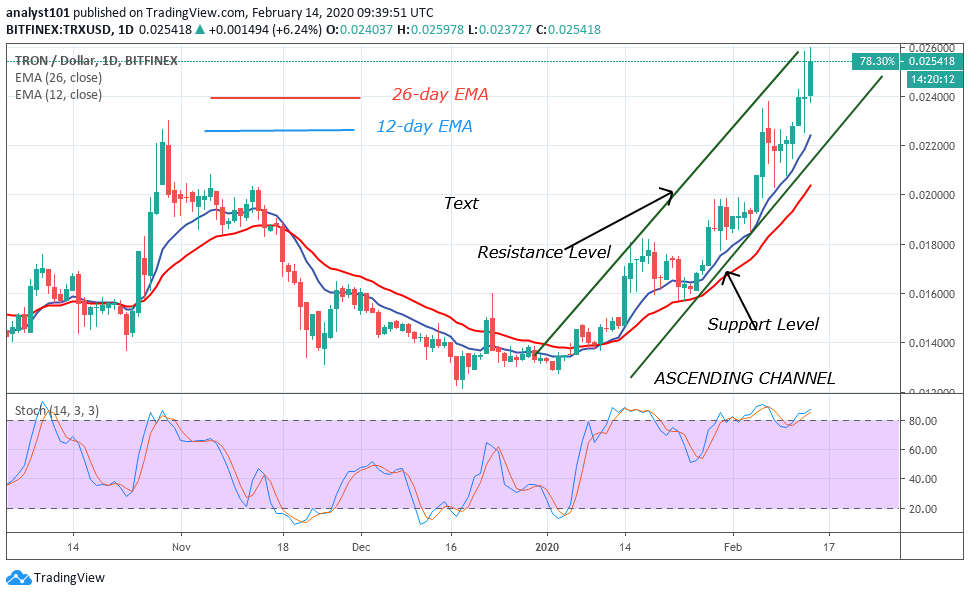 Stellar (XLM) has been moving sideways since July 2019. The bulls have made three unsuccessful attempts to hit the $ 0.090 resistance. Every time the bulls are rejected, the coin drops to the low of $ 0.053, or $ 0.042. The market moves above the support after a period of consolidation. Today Stellar is going back after resisting the bulls. 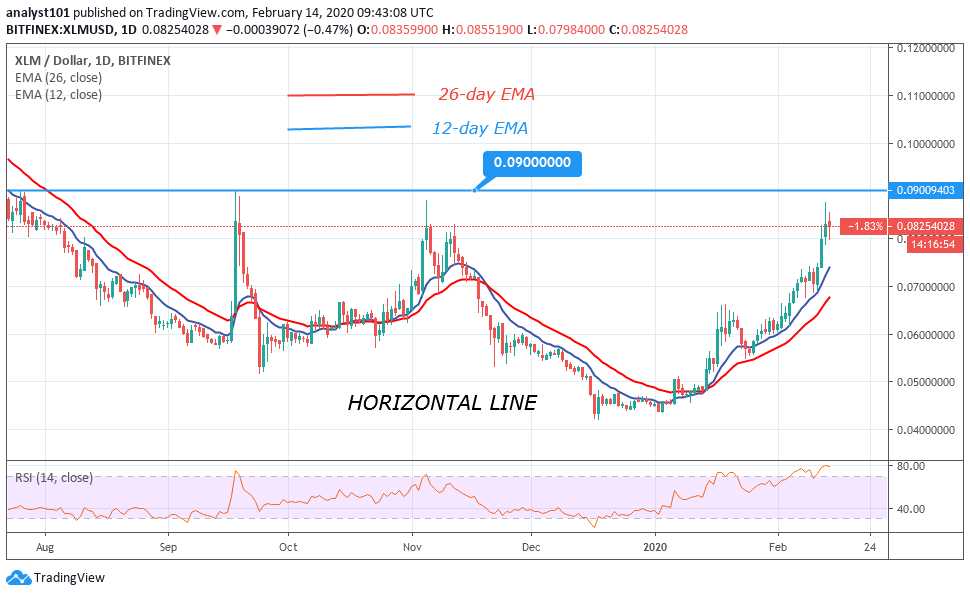 As usual, the market will drop to either $ 0.042 or $ 0.053. The Relative Strength Index 14 period, level 80, indicates that XLM is in the overbought area of ​​the market. Vendors come to the region to push Stellar down. This confirms the earlier price action.

Monero (XMR) is on an uptrend, but it’s currently being resisted at a high of $ 96. The price fell back to the USD 90 support and rose to the upside. Monero will be outside the downtrend zone if the USD 96 resistance is broken. On the flip side, Monero is expected to rise above $ 110 if the current resistance is broken. 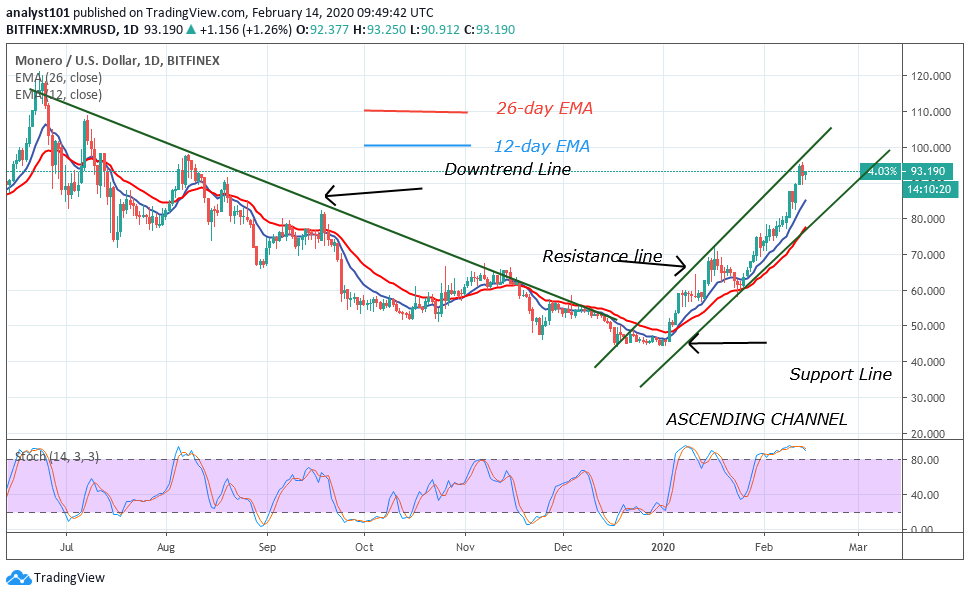 On the flip side, the coin has fallen to a low of $ 90 and is resuming the upward move. Meanwhile, Monero is already trading over 80% of the daily stochastics. The stochastic bands are inclined horizontally over 80%. This implies that the coin is in strong upward momentum and at the same time in the overbought territory. It’s unclear how long the overbought condition will last while the bands sway.

Currently, Ethereum Classic (ETC) has been in a sideways movement since January 29th. The previous bullish move stalled at the USD 13 resistance. In the past two weeks the cops have made three unsuccessful attempts to break the resistance. 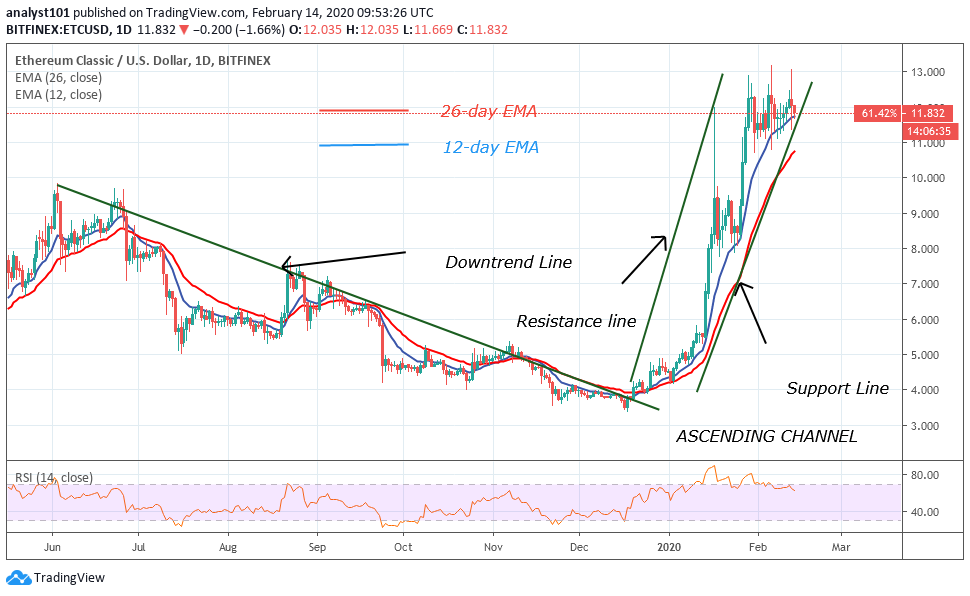 The coin is now between $ 11 and $ 13. On the flip side, if the bears break the USD 11 support level, ETC may drop to a low of $ 8. On the flip side, ETC can also soar to the $ 13 high if the bulls are successful. Meanwhile, period 14 of the Relative Strength Index is at level 65, indicating that ETC is still in the uptrend zone. The coin can probably go up again.

“There is no Bitcoin without mining”