Bitcoin, a limitless, digital currency that is not controlled by a central bank but by a code, officially became legal tender in El Salvador on Tuesday despite international skepticism and rejection.

The rollout came just 90 days after President Nayib Bukele, a populist, announced plans to launch the cryptocurrency at the Bitcoin 2021 conference in Miami.

In the months since that announcement, which ended the glamorous two-day meeting, the government has worked to prepare the economy for a law obliging all businesses to accept Bitcoin as a means of payment and allowing citizens to pay taxes in Bitcoin as well.

For his part, Bukele did not flinch. The 40-year-old president tweeted that the country “bought the dip” after Tuesday’s price drop, saying El Salvador now holds 550 bitcoin in reserve, which is about $ 25 million at the current price of $ 47,000 a coin is worth. Not everyone is so convinced of the country’s prospects. Crucially, the International Monetary Fund (IMF) isn’t happy with the country’s leap into crypto land. As El Salvador is negotiating a $ 1 billion loan, the international lender has made it clear that it sees the introduction of crypto as a threat to economic stability.

Bitcoin maximalists, however, predictably herald the introduction as a turning point for the world’s largest cryptocurrency, even if skeptics point out the possible risks of placing Bitcoin, a volatile digital asset, alongside the US dollar as a means of exchange and store of value.

Many who are less ideologically committed are simply waiting to see what happens.

“This really is nothing more than an experiment to see if a country can add Bitcoin to its balance sheets without negatively impacting its financial position,” Christopher Vecchio, a senior strategist at analytics firm DailyFX, told Cheddar.

To measure the success of this experiment, most industry observers believe it is necessary to look at one of the main indicators of El Salvador’s economy: remittances.

Transfers, i.e. non-commercial payments from abroad, are the lifeblood of the Salvadoran economy.

“When we see a significant portion of that flow being converted into bitcoin, we can say that this is a success,” said Vecchio.

Vecchio, like many in traditional finance, has been skeptical of calls to make Bitcoin a medium of exchange in low-income countries like El Salvador and Afghanistan, but he believes that Bitcoin offers advantages in cross-border transactions specifically.

“After all, Bitcoin is supposed to be smooth,” he said. “This could be a way to send money back cheaply and quickly domestically.”

“What would success in El Salvador look like? Success will look like people are receiving their bitcoin transfers through the Chivo app or any other app they use and people and businesses will be much more comfortable holding bitcoin themselves, ”he said.

Government employees are waiting for the Chivo digital wallet machine, which will exchange cash for Bitcoin cryptocurrency, to open in Las Americas Square in San Salvador, El Salvador, Tuesday, September 7, 2021. As of Tuesday, all businesses will have to accept payments in Bitcoin, except of those who lack the technology to do so, under a law approved by Congress. (AP photo / Salvador Melendez)

Days after the official launch, it’s impossible to tell if Salvadorans are already converting to Bitcoin in large numbers, but recent data shows that the country was moving in that direction even before the new law.

Vecchio noted that this was still a drop in the ocean when compared to the total value of transfers to El Salvador.

However, in the cryptocurrency world, it is conceivable that the introduction of Bitcoin could be used for less socially meaningful purposes, such as: B. circumventing taxes or engaging in illegal activities.

Amanda Wick, Head of Legal at Chainalysis, told Cheddar that it is vital for El Salvador to develop its Bitcoin economy carefully and responsibly.

“Basically, success will look like increasing acceptance and use without illegal use increasing accordingly,” she said. “We have seen this across the industry where usage has exploded but illicit usage has not.”

Aguiluz’s firm spent much of the lead up to the rollout working with companies to set up terminals that would allow them to decide how much of the bitcoins they accept from customers are instantly converted to dollars. He noted that most companies will exchange most, if not all, of the bitcoins they receive, while a small number will keep their bitcoin and hope it will appreciate in value.

He said much of the pre-launch confusion came from business owners who didn’t understand how adopting Bitcoin would affect their bottom line, but now ordinary Salvadorans are opposed to Bitcoin adoption.

Aguiluz said the outcry stems mostly from understandable frustrations with the pace of adoption, rather than from innate opposition to Bitcoin. 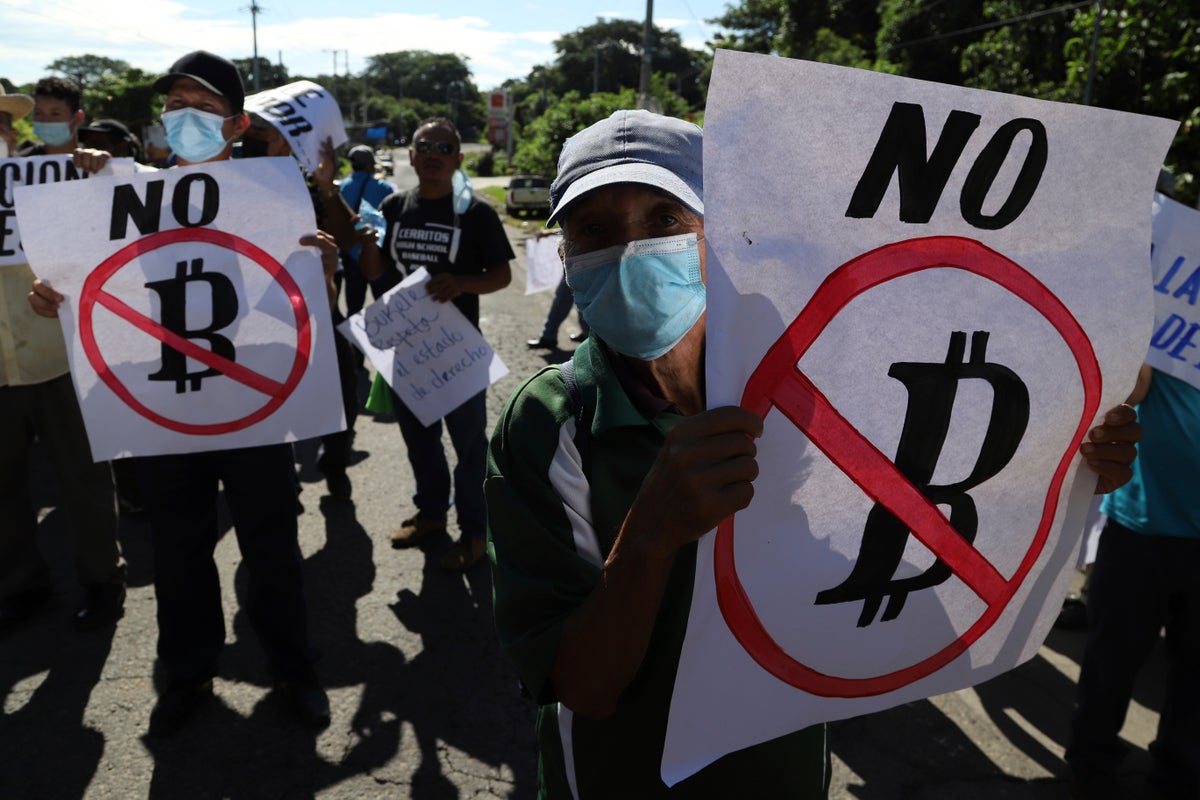 Farmers hold signs with messages against the country adopting Bitcoin as legal tender during a protest along the Pan-American Highway in San Vicente, El Salvador, Tuesday, September 7, 2021. El Salvador was the first country to adopt Bitcoin as legal tender on Tuesday, but the rollout stumbled in the first few hours and President Nayib Bukele announced that the digital wallet used for transactions was not working. (AP photo / Salvador Melendez)

“I’ve seen people go to the protests and their general opinion is not that they are necessarily against Bitcoin, but rather they are against the way the whole thing was handled,” he said. “In this sense, people need more education and more time.”

You also need better internet access, as many law critics have pointed out.

According to the World Bank, only a third of the nation currently has internet access.

“It feels a bit like a start-up, right, with a broken app and all,” Sarah Kunst, chief executive of Cleo Capital, told Cheddar. “But the reality is, these are real people in a real country, looking around and saying, ‘I don’t even have WiFi.'”

In other words, without infrastructure and trust, Bitcoin could find it difficult to penetrate the majority of El Salvador’s population. In addition, events like Tuesday’s price drop – which the president shrugged as an opportunity to buy the dip – could make it difficult to build trust for a population still trying to understand the fundamentals of cryptocurrencies.

“For people who got into Bitcoin for the first time yesterday in El Salvador, they took the plunge and suddenly the value of their stake fell by 18 percent at some point,” Vecchio said on Wednesday. “That’s not really a sign of belief that it is a viable asset store, and that makes widespread adoption a lot more complicated.”