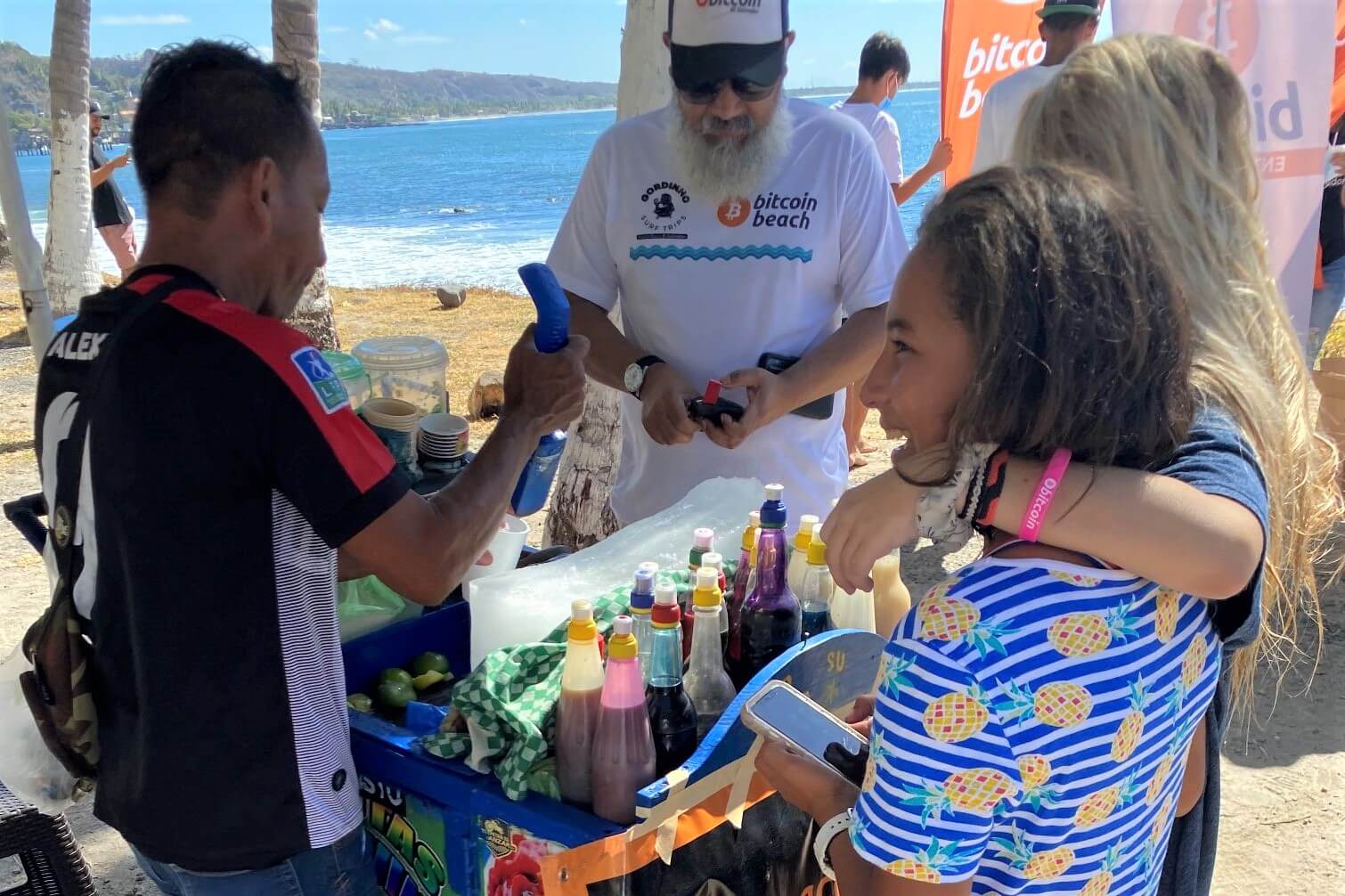 A dealer in El Zonte in El Salvador or on Bitcoin Beach. Source: Twitter / @ Bitcoinbeach

The passage of laws in El Salvador that could encourage the advancement of Bitcoin (BTC) as a store of value and medium of exchange in the country is one of the most important developments in the entire history of cryptocurrencies. This is the next time a country has adopted a Bitcoin standard. However, the US dollar is likely to remain the most important unit of account in El Salvador for some time to come.

Some critics have said that El Salvador’s promotion of a Bitcoin standard does not make sense because there is not enough transaction capacity in the chain on the Bitcoin network. However, these critics ignore the development of various Layer 2 Bitcoin networks such as the Lightning Network, RSK, and Liquid. It is important to understand that it is these upper layer bitcoin protocols that are being tested as El Salvador embraces bitcoin and not necessarily the base blockchain.

There are three main reasons for El Salvador to accept Bitcoin. For one, 20% of the country’s gross domestic product (GDP) comes from remittances, according to the latest data from the World Bank. 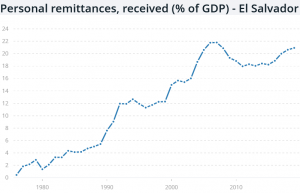 This means that a large part of the population depends on money transfers from abroad in order to make ends meet. According to Strike CEO Jack Mallers, the cost of a transfer from the US to El Salvador can be up to 50% of the transfer value, on top of the security and time costs of collecting the money at a physical pickup location.

Second, El Salvador has an incentive to break its dependence on the US dollar and use a neutral store of value for savings, as newly issued dollars tend to dilute value when they reach the Central American country. This phenomenon is known as the Cantillon Effect.

For example, the people of El Salvador did not receive any of the new money created to send stimulus payments in the United States.

By the time the money gets to El Salvador, inflation has set in. This setup is an advantage for Americans, but not so much for El Salvador.

Third, according to President Nayib Bukele, around 70% of the population in El Salvador do not have a bank account. This restricts access to the global financial system that has emerged on the Internet and increases transaction frictions in the economy.

Strike and the lightning network

Strike can be summarized as a Venmo and Cash app alternative that is heavily integrated into Bitcoin’s Lightning Network. A Strike user can send value from the United States to El Salvador instantly and at low cost over the Lightning Network. While critics have pointed out that Strike users in El Salvador hold US dollar value through stablecoins like Tether (USDT) rather than Bitcoin, in reality, users can also use US dollars in their Strike account instantly on any Lightning Network -Send invoice. Regarding the wire transfer use case, the key point is that Bitcoin’s ability to act as digital cash enables instant and free money transfers from the United States to El Salvador. With Strike, those receiving wire transfers in El Salvador can choose to receive US dollars in the form of a stablecoin (although the use of Tether is now phasing out) or receive Bitcoin straight into their own Lightning Network-enabled wallet like the one developed by the Bitcoin Beach community.

To pay his bills in El Salvador ##, says Milton Cabrera, he would have to “spend an hour on the bus and two more… https://t.co/WJsOPWpeHl

In a situation where non-KYC (know your customer) stablecoins, which are subject to increased scrutiny, no longer exist, the improvements in transfers to El Salvador made possible by Bitcoin could be greatly enhanced by developing a circular economy, the cryptocurrency. But even in this scenario, those looking to hedge against Bitcoin’s volatility could do so through technologies like Discreet Log Contracts (DLCs), which would effectively allow users to short Bitcoin and keep the US dollar in their Bitcoin wallet one click to lunge button. However, these hedging contracts can also prove to be a bit costly as someone has to be willing to take on the other side of the trade.

A key criticism of the Lightning Network from those who are either pessimistic about Bitcoin or who advocate a particular altcoin that focuses on low-value payments is that it holds some of the most popular Lightning Network-enabled wallets. This is because a depot setup creates a much more user-friendly experience. In fact, the Bitcoin Beach Wallet operates on a “shared custody” system where each user’s bitcoins are truly in the hands of trusted members of the Bitcoin Beach community, rather than each user having full control over their own funds.

Of course, anyone can still use any Bitcoin wallet, and there are also many unstored Lightning Network-enabled options available.

Additionally, potential future improvements to the Bitcoin protocol, such as SIGHASH_ANYPREVOUT, could help make these non-custody wallets more attractive to end users. El Salvador’s adoption of Bitcoin should offer plenty of opportunities to experiment with different trust models for Lightning-enabled Bitcoin wallets. However, if you want a higher degree of financial sovereignty, you have to be prepared to pay for it, at least for now.

While the Lightning Network gets the most attention, it isn’t the only Layer 2 Bitcoin network in existence today.

The Liquid-Federated sidechain is another alternative to using the basic blockchain that makes various tradeoffs, and it could play a role for Liquid in El Salvador. Blockstream specifically mentioned how Liquid could help modernize El Salvador’s financial market. According to Samson Mow, Blockstream’s Chief Strategy Officer, it is also possible that stablecoins that are closely linked to the traditional banking system, such as Tether and USD-Coin (USDC), could see a new competitor in the form of a Bitcoin-backed stablecoin, which is issued on liquid. While still centralized and trustworthy, this alternative stablecoin model might have the added benefits of improved transparency and security of reserves.

Another Bitcoin sidechain that has seen tremendous growth in 2021 is RSK, which is compatible with smart contracts created for use on the Ethereum (ETH) network but uses a BTC-linked token for gas payments instead of ETH . Two of the most popular applications at RSK today are Sovryn and Money on Chain. Money on Chain’s Dollar on Chain (DOC) token may be of particular interest in El Salvador as it is a somewhat decentralized, Bitcoin-backed stablecoin that is pegged to the value of the US dollar.

“The people of El Salvador will be the world’s beta testers for the usability of Bitcoin for trade and finance – decentralized or otherwise,” the pseudonymous Sovryn employee Ingalandia told Cryptonews.com.

“Since it’s a country where the majority of its population does not have a bank account, Bitcoin applications like Sovryn could be their first experience with safe savings accounts. Once they earn interest by lending a value-adding asset, things will really turn.”

It should also be noted that, similar to the Lightning Network, simple Bitcoin payments via Liquid and RSK are also cheaper than on-chain transactions.

There is still a lot to be done when it comes to improving the privacy, scalability, censorship resistance, and interoperability of the Lightning Network, Liquid, and RSK. However, El Salvador has created a useful environment for seeing how valuable these Layer 2 systems can be as the world continues on its way towards a Bitcoin standard. The entire country of El Salvador is not going to switch from dollars to bitcoin overnight, so it’s useful to remember that just because these projects aren’t perfect today doesn’t mean they can’t offer tremendous value in the long run.
____
Learn more:
– Bitcoin starts testing legal tender with a BTC airdrop on September 7th
– Bukele teases the volcano-powered bitcoin mining center when the exchange hits

– Understand what El Salvador’s President Bukele turned into Bitcoin
– El Salvador Brings New Global Mystery – What Is Bitcoin And How Is It Taxed?

6 things you need to know about crypto taxes; Interview with David Kemmerer, Co-Founder and CEO of CryptoTrader.