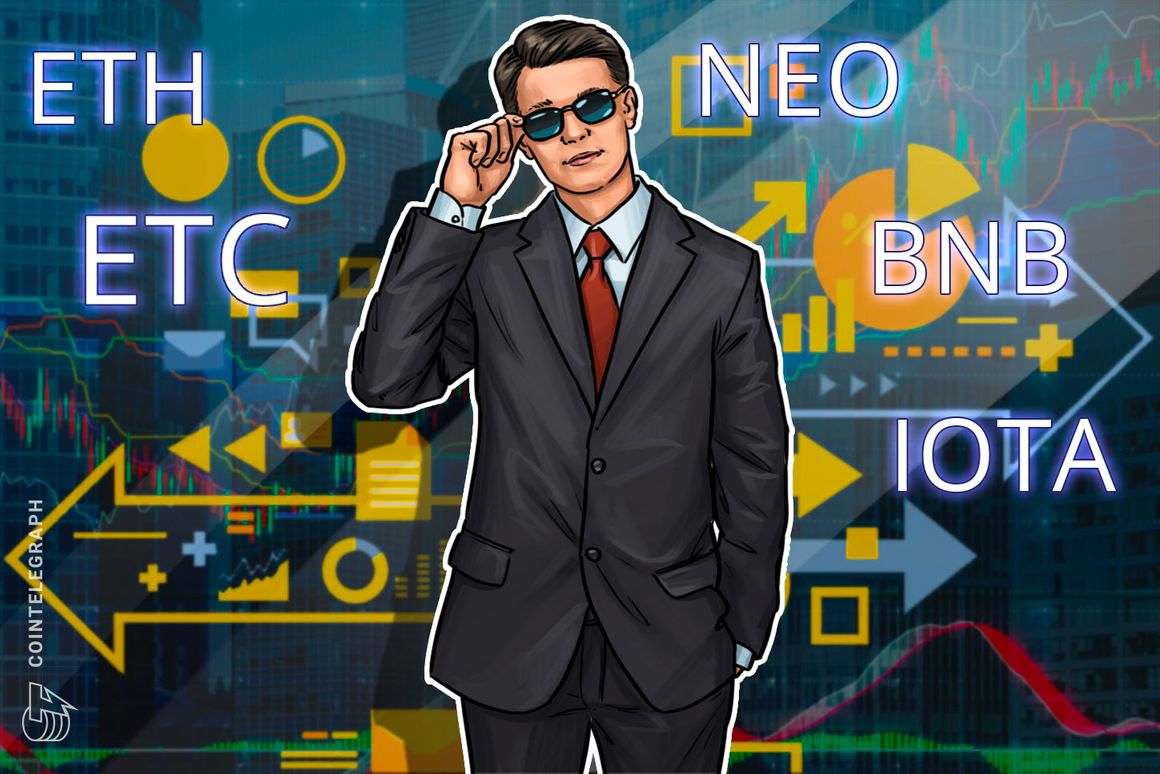 The market data is provided by the HitBTC Exchange.

While 2017 was a raging bull market for cryptocurrencies, 2018 turned out to be a massive bear market that wiped out more than $ 720 billion of total crypto market cap. We believe 2019 will bring the focus back to fundamentals and the true potential of virtual currencies.

With the arrival of traditional investors, digital currencies will sometimes behave similarly to traditional markets. The Wall Street Journal recently pointed out that the correlation between Bitcoin trading and gold reached as high as 0.84 in a short period of time. Similarly, it traded with a correlation of 0.77 to the volatility index (VIX) on the Chicago Board of Options Exchange.

As the market matures, it will find a niche for itself. We believe that cryptocurrencies are currently bottoming out and could signal a bottom within the next few weeks.

After Ethereum (ETH) relinquished its position as top altcoin to Ripple (XRP) a few weeks ago, it is trying to make a comeback. It made huge strides last week and emerged as the top performer among the major cryptocurrencies.

Arthur Hayes, CEO of BitMEX, believes the dead ICO market will kick back into action next year and turn out to be positive for Ethereum. He expects the cryptocurrency to rise to $ 200. Some hope that the upcoming Constantinople upgrade will give the network a boost. However, it is always difficult to predict the market’s reaction to such a major event.

The long-term trend in Ethereum is pointing downwards. It lost a lot of money to its investors this year. However, can the ETH / USD pair start a new uptrend after autumn 2019?

After every rise and fall, the digital currency tends to consolidate in a range. We have highlighted these time periods with ellipses in our diagram. In 2018 all areas dissolved downwards.

Currently, the bulls are attempting a pullback after hitting a low of $ 83. The support line from the previous range will now act as a rigid resistance. Because of this, we expect a sale near $ 167.32. If the bears manage to defend this level, a range-restricted trade could take place.

Our neutral to bullish view will be invalidated if the price goes down and drops below $ 83. We will confirm the start of a long-term uptrend when the pair forms a large base pattern and then breaks out of it. Until then, traders should aim for small goals and make regular profits.

Ethereum Classic (ETC) turned out to be the second best performer among the top cryptocurrencies. Market participants are optimistic about the upcoming cohort, which is scheduled for January 14th. 11 startups were selected to get access to the shared office space, developer support and funding. Can the bull run go on? Let’s find out.

The long-term trend for the ETC / USD pair is on the downside. Currently, the bulls are trying to break out of the downtrend line that has capped all recovery attempts since May this year.

A break out of the downtrendline is the first sign that the momentum is weakening on the downside. This can lead to a rally to the next overhead resistance of $ 9.5. We expect a strong defense of this level from the bears.

However, if the bulls don’t break out, the cryptocurrency may fall back to its recent low of $ 3.3. Any break in this support can continue the downtrend.

After the long downtrend, we assume that the virtual currency will enter a consolidation phase before breaking out into a new uptrend. Long-term investors can therefore wait for a reversal setup to form before taking positions. However, short term traders can stay on the long side after the price breaks out and closes above the downtrend line.

Stratis currently ranks 40th in terms of market capitalization. It recently released the first Turing-complete smart contracts to execute .NET code in the chain and its first sidechain, Cirrus, for the Stratis mainchain. These offer companies and blockchain developers the perfect platform to create bespoke blockchains that are tailored to specific applications.

There have been a number of announcements from the Stratis Group over the past few months. It has partnered with MediConnect, the company focused on blockchain solutions for the pharmaceutical industry.

It also became a certified Microsoft Independent Software Vendor (ISV) a few months ago, which was a huge step ahead. Given positive fundamental news flow, is it a good time to buy the cryptocurrency? We will see.

The positive, however, is that it participated in the most recent pullback.

If successful, the cryptocurrency will try again to move towards the overhead resistance of $ 1.91493444. If that level is exceeded, the rebound can extend to $ 2.14656768. We expect a new uptrend to begin if the bulls hold the price above this level.

Traders can wait for the price to recover from the 20-day EMA and climb above $ 1.46 to take long positions with a stop loss just below $ 1.15. Partial wins can be booked near $ 1.84 and the stops for the remainder can be pulled higher.

However, if the bears pull the Stratis below the moving averages, it will lose momentum and correct as low as $ 0.81338679, below which the lows are likely to retest.

NEO has announced its second edition of DevCon for February 19th. The founder of NEO, Da Hongfei, is not deterred by the current bear market. He believes that the price of the cryptocurrency only tells part of the story as it is primarily determined by mood. Hongfei continues to focus on the project and the ecosystem and calls the current phase “ContiNEO – We are continuing,” reported Forbes.

Should the bulls fail to overcome the overhead resistance, we expect a consolidation phase of a few days. The downtrend will continue if the bears drop the cryptocurrency below $ 5.4808 again. Traders should wait for a trend reversal before entering new long positions.

IOTA tried to climb back into the top 10 cryptocurrencies by market capitalization, but was unsuccessful. Last week it was the fourth best performer. What does his diagram look like now?

The IOTA / USD pair is trying to form a base pattern. It is currently about to sell at the previous support which became resistance at $ 0.4037. If the bears continue to defend this level, we expect a consolidation between $ 0.2051 and $ 0.4037 for a few weeks.

Should the bulls break above $ 0.4037 contrary to our expectations, it would indicate that the markets have rejected the lower levels. In such a case, it is likely to rise to $ 0.8152.

Aggressive traders can try long positions above $ 0.4037 to close, while long-term investors can wait for a new uptrend to start before buying it.

In a letter entitled “2018 Binance Year-End Review”, Binance CEO Changpeng Zhao painted a positive picture of the crypto industry. He has also outlined the various plans for the Binance exchange and its own cryptocurrency. What is the chart projecting? Let’s find out.

The BNB / USD pair was a relative outperformer. It successfully held the support at $ 4.5200621 for four weeks, after which the bulls attempted a retreat.

For the past two weeks, the bulls have held the price above $ 5.4666 which is a positive sign. This shows that the markets have rejected the lower levels. The digital currency is likely to rise to the resistance level of the descending channel, closer to $ 8.25. The short term traders can try to ride this move up.

However, long-term investors should wait for the price to break out of the channel before attempting a trade. Our bullish view will be invalidated if the bears push the digital currency below $ 4.1723848.

The market data is provided by the HitBTC Exchange. Diagrams for analysis are provided by TradingView.

* Disclaimer: Stratis is a featured cryptocurrency by one of the sponsors of Cointelegraph, and its inclusion did not affect this price analysis.