Ethereum’s price has risen over the past week, which has helped the cryptocurrency to fill its gap with its close rival, XRP. As 2019 begins, it is possible that Ethereum will regain its dominant position as number two by market capitalization.

XRP was number two by market capitalization for most of 2015. Then the Ethereum ICO took place between July and August 2014, where it stayed under the radar until August 2015. Then interest in the project exploded. From then on, Ethereum has remained at the forefront of the public and has cemented its position as the number two cryptocurrency after Bitcoin. That is, until the fourth quarter of 2018.

In 2017, Ripple exploded back on stage after forging a number of powerful partnerships including American Express, Santander, RBC, IndusInd Bank, and many others. Ripple has significantly more major institutional customers than any other cryptocurrency. Ripple’s advancement allowed XRP to weather the market winter and record smaller losses than most other cryptocurrencies – while Ethereum withered.

However, in the past month, Ether has shown considerable gains. In the past thirty days, the price of a coin rose from $ 117 to $ 141, an increase of more than 20 percent. This rebound has allowed Ethereum to fight for second place again: 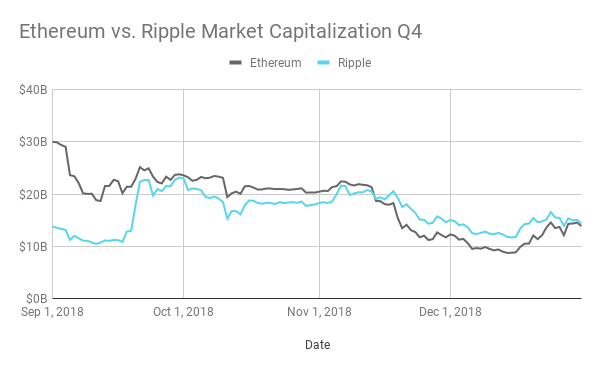 Whether Ethereum will maintain its strength or shrink back to third place in terms of market capitalization remains to be speculated. As the old saying goes, past performance does not guarantee future results.

For much of the fourth quarter, Ethereum was devastated by the cryptocurrency bear market. The price of ether rose from $ 283 to $ 82 per coin. However, within the last week the price has risen back to a comfortable $ 140.

Ethereum appears to be suffering from a hangover from its astronomical gains in 2017. Since then, the lack of progress and a mismatch in market expectations with actual results have decimated the price over the course of the crypto winter. The price may have bottomed at the low $ 80 and is now rebounding as confidence in the ether returns, with the expectation of the Constantinople update adding to the resurrection.

Meanwhile, the price of the XRP has deteriorated after seeing a big spike in September. At the start of the fourth quarter, the price of XRP was $ 0.35 and briefly hit $ 0.61 in mid-September. At its lowest point, the price slumped to $ 0.29 before returning to $ 0.36 for the New Year. 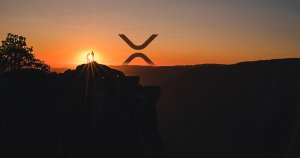 Related: Ripple’s Success: Why XRP Stopped So Fast Amid the Collapse of the Crypto Market

XRP’s monumental price spike may have been triggered by the announcement of Ripple’s partnership with PNC Bank, a top ten bank in the US. PNC joined RippleNet on September 19th, allowing PNC customers to receive cross-border payments in real time.

Effects of a switch

However, if Ethereum regains its position as number two for an extended period of time, it is possible that it could damage confidence in XRP. Whether that will happen, however, is a guess.

Tell CryptoSlate what you think in our Ripple vs. Ethereum poll on Twitter.

THETA Bulls hold on for a lifetime

EXCLUSIVE: From Bitcoin to BitBoy: A Crypto Story with Ben Armstrong