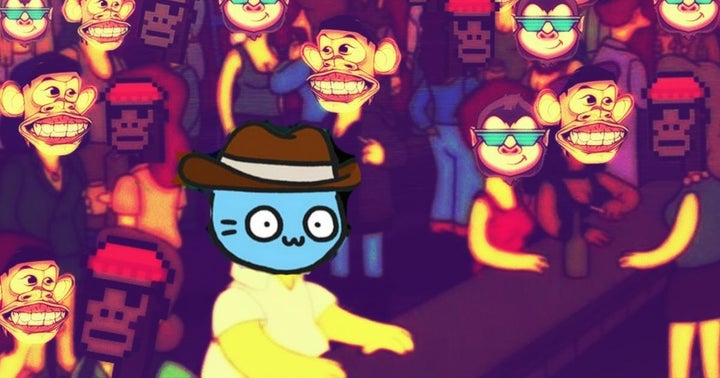 The new, generative NFT project repeats the biggest NFT success of the summer with new cats on TRON.

The appetite for NFTs hasn’t let up, with sales peaking in early September and closing the month at over $ 2.8 billion, according to Nonfungible.

As long as the NFT space continues to have such tremendous demand from buyers, it will continue to bring us new and innovative projects.

For example, Meta Sapiens will soon start the “World’s AR NFT Art Project” – an interesting approach for NFTs where you can use an app to take selfies with your AR NFT art piece. This should be a step forward in showing off a fancy NFT as your Twitter profile picture – now your NFT is your time to pose.

Floating Spaceman: MetaSapiens # 06436 – inspired by “Me Against The World” Space Tripper: Born in the 1970s, this Sapiens is unusual.

NFT platform VUELE ™ recently announced that it grossed $ 93,435 with the release of a total of eleven NFT drops of the feature thriller ZERO CONTACT starring Oscar-winning Best Actor Anthony Hopkins. The NFT “Platinum Edition” was sold for 20 ETH (US $ 56,860).

WomenforAfghanWomen.org (WAW) has partnered with Bookblocks.io to create exclusive artwork inspired by legendary author Louisa May Alcott. All profits go directly to WAW Louisa May Alcott was a pioneer in women’s rights and would therefore advocate the WAW’s mission to raise funds to provide Afghan women with access to education.

The hottest project of the summer was Cool Cats – but if you don’t have the more than $ 12,000 to buy the cheapest Cool Cat available, Palmar Labs has the antidote with Cool Cats TRON, a new generative NFT project being launched in the June was started.

Cool Cats Tron follows the example of its Ethereum-based predecessors, offering 10,000 Cool Cats out of 300,000 options for body, face, hat, and costume that determine the cat’s ranking.

The fact that the project was merely inspired by the success of Cool Cats extends the facts. Palmar Labs is trying to repeat the success, but in a new chain for a new audience.

“It is obvious that we took the idea of ​​CoolCats from the ETH project, some people called us imitators (pun intended), some think it’s cool. People ask us why?

We have great faith in TRON and its development and blockchain, it’s amazing to send NFTs and do transactions, and not only is it safe but also cost about $ 0.00001 while you pay $ 25 on the ETH chain, which is sometimes more than the NFT cost (numbers may vary, but the ratio does not). I mean, these are cops **.
So we took the project and developed it further together with the community. We gave people the chance to buy a cool cat not for 10 ETH minimum prices (about $ 30,000), but for 1500 TRX (about $ 130).

It was a nerve-wracking but also rewarding journey. We are growing day by day and people from all over the world are joining us. I’m exhausted and have too little sleep, but the excitement and the feeling of creating something cool are stronger, ”said Weber.

More than 500 cats have been sold to date and the project is in full swing thanks to a new partnership with APENFT, which has already supported some of TRON’s most popular and best-selling NFT projects, including meebits and tpunks.

To announce the relationship, APENFT tweeted:

“We are pleased to announce that we have entered into a strategic collaboration with @CoolCatsTron. The NFT special fund is used for the development and operation of @ CoolCatsTron projects. Together we will push ahead with the construction of the TRON NFT Ecology. @justinsuntron @Tronfoundation @BitTorrent ” 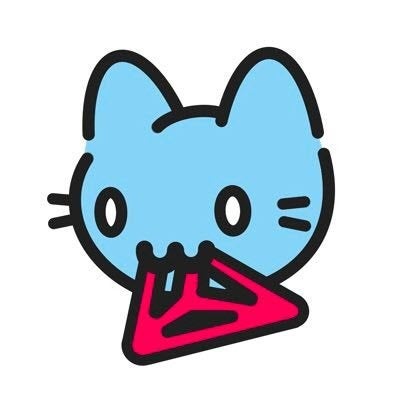 What is your relationship with TRON?

“We have an official partnership with the TRON Foundation. So we will get official support through their community marketing and they will share in the revenue of our new marketplace, which will encourage us to integrate deeply into the products of the TRON ecosystem, ”said Matusso.

“We are the fifth project on the TRON blockchain and already have as much development as some projects that have been running for months,” said Matusso. 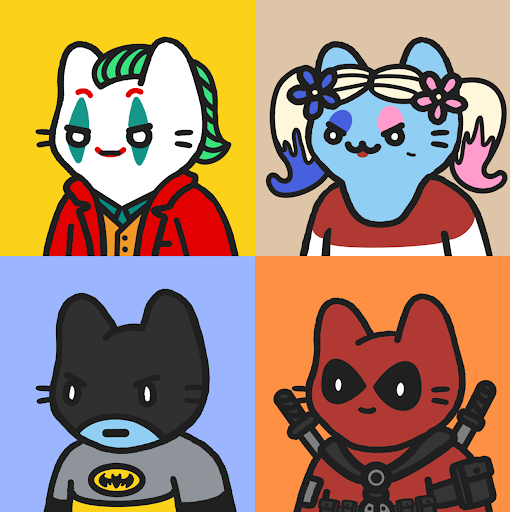 What are you doing with gamification and hype about your fan base?

“We communicate a lot via Telegram, Twitter and Discord. There are real fans on Discord who make suggestions, ask detailed questions about the project and gamification is a very big part of our project as giveaways also attract a lot of people …

On Discord we recently introduced 10 levels for people who like to communicate so people won’t be afraid to ask questions, make suggestions, etc. When you reach level 5 you will be given legendary cat status. Once you reach out to a legendary cat, you have permission to participate in weekly giveaways that the community loves too. We’ll be holding a special raffle once a month among all cat owners to drop a rare cat.

And a lot of success in building a good community comes from talking to them openly. Because in general people like an open and transparent project, ”said Weber.

What are the hottest cool cats right now?

“People love the Pokemon GO Cats. They really love them because I think everyone was into the Pokemon games and they have die-hard fans, ”Weber said. 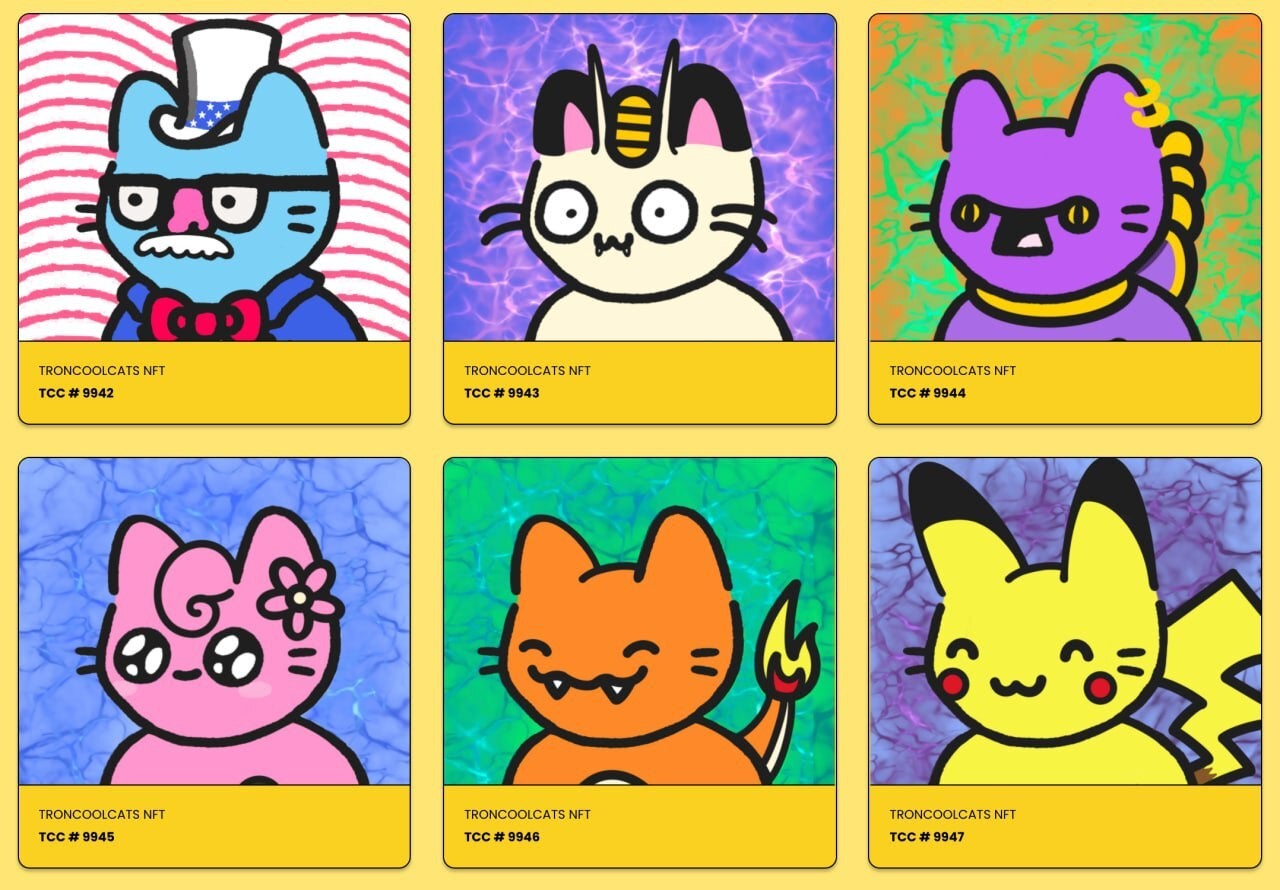 What’s your secret to the success of Cool Cats TRON? How do you measure your success?

“I think there is no secret. It’s about hard work and about the team. We have a really solid, professional team. I think we have the best smart blockchain smart contract developers on TRON right now. And we have really creative illustrators and artists on our team, ”said Matusso.

Weber sees what makes a great success differently and refers to the strength of the community.

“I think we’re a lot warmer than other projects. Other projects may have a cool design, but from the point of view of the community we are committed to, they want to help us, they want to do their part. We recently ran a competition and accidentally sent the winner two cats instead of one. He was so nice that he said he was doing a giveaway (one of the NFTs) of himself to his community. Nobody asked him … I don’t think there is one in other parishes, ”said Weber.

Weber shared the tweet from @ rayong71, the user who gave away his extra cat: 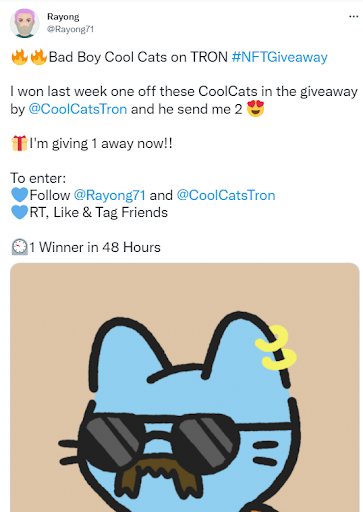 Successful NFT projects live and die because of their relationship with their audiences and their ability to excite audiences.

Cool Cats TRON may replicate the success of a previous project, but this is a new audience on TRON and the Cats are careful to reward their buyers at every part of the process, including after the sale.

Cool Cats TRON is setting up an incentive pool for NFT owners. Anyone who becomes a Cool Cats TRON pool owner will receive a portion of future Cool Cat TRON NFT sales.

“It’s not always perfect and perfect, compared to my previous experience, the project is progressing much faster because there is a lot of competition and the crypto market is developing incredibly quickly, so our team has to be flexible and available almost 24/7. We have to keep what we promised, otherwise the community will get mad, it’s an open transparent space, everyone can check your smart contract and see whether or not work is really being done, ”said Weber.

As Weber said, you can easily look at the transactions on TRON. But that’s fine when sales are strong and the news is always good.

I love the zeal of a good NFT project, and the enthusiasm that Cool Cats TRON has for its audience is likely to keep this project going as a successful project. Until everyone is on board, the party will apparently continue.