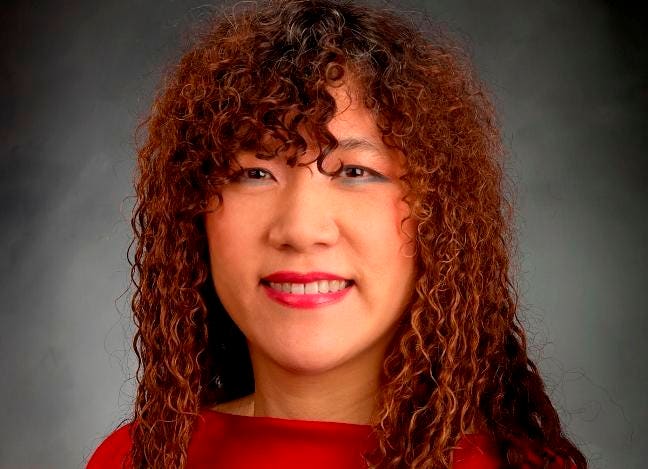 Weili Dai is the President and one half of the dynamic-duo husband and wife management team that co-founded the innovative fabless semiconductor company Marvell Technology Group (NASDAQ: MRVL) in 1995.  Today the publicly traded company has over 7,000 employees, operates design centers around the world, ships over one billion chips a year and is a dominant player in the high volume storage solutions sector with a strong presence in mobile and wireless, networking, consumer products and is now building out its “Internet of Things” offerings in both software and microprocessors. And it’s near 20 year journey from family business start-up to a leading global player with nearly 3.5 billion dollars in sales competing against the likes of IBM, Intel and AMD in the rough and unforgiving semiconductor business, is nothing short of extraordinary.

“My husband and I met at UC-Berkeley. I was doing Computer Science as an undergraduate in Software and my husband was studying his PhD in electrical engineering. Marvell is our passion. Because of our determination and hard work, we had the confidence and the belief in our capability to start from very humble beginnings and continue to scale to where we are today,” says the ever effusive Dai.   Invention and innovation is the lifeblood of the company that seems to stay one-step ahead in the fast-moving semiconductor business.

In fact, Dr. Sutardja filed over 360 patents, which is unusual for the CEO of a company this size to be so personally involved in technological innovation. The tandem’s division of labor seems to work.  “I drive the company overall, arrange the company business and business direction, strategies and manage our major partnerships. We’re complementary to each other’s skill set,” continues Dai.

The semiconductor business is typically capital-intensive and highly competitive, perhaps even more so twenty years ago.  So how did Marvell get its start?  Dai and her husband bootstrapped the business with a $350,000 investment from family members. They hired four engineers and didn’t pay themselves for a while.  “People ask me, “How did you do this?”  Actually the answer to me is pretty simple because I am very fortunate I grew up in such a loving, caring family.  My parents are just so wonderful.  They’re always encouraging and very supportive.  I have two older brothers and I’m the youngest of three and our upbringing was always about being positive and encouragement,” says Dai.  While now public, the company’s culture is very much still about family.

Born in Shanghai, Dai’s family moved to San Francisco in 1979.  “In Shanghai there’s the different quarters, like the French Quarter, the district where I grew up in Shanghai and I used to represent the team where I played semi-pro basketball from age 9-14 for five years. I believe that helped me to develop the confidence, the health, the discipline, the teamwork concept and then of course the family upbringing is truly the foundation,” says Dai.

Her family witnessed the tumultuous upheavals in the China business landscape with the onset of the Cultural Revolution and its destruction of most family businesses to its re-birth in successive generations. Dai’s mom used to be a head nurse for one of the hospitals in Shanghai.  Her father was an engineer who also studied English and Russian.  “In the old days a lot of technology and science exchanges were the result of collaborations with scientists and engineers from Russia,” says Dai.

She went to high school in San Francisco and was then accepted to UC-Berkeley to study Computer Science. “I met my husband at the end of ’83 and then we got married October ’85 and our first son Christopher was born in April of ’88 and in May of ’88 my husband finished his PhD degree so that year was the Year of the Dragon, a very special symbol in Chinese culture. and that was what I call the true deliverance that year,” says Dai.

Berkeley remains close to Dai’s and her husband’s hearts. “Berkeley has this project called CITRIS, which incorporates research on nanotechnology, biology, social science, life science, and medical all combined under one roof. That was a project started in early 2000 and when this school approached me and my husband about the idea we were very excited and provided significant support for it. Now there is a building named after Sutardja, which is my husband’s last name and Dai, my last name, so there’s a Sutardja Dai Hall at Berkeley. In 2010 my son Christopher received his undergraduate in Electrical Engineering. It very special for me because it was the same stage, that in 1988, my husband walked and received his PhD and my son Christopher was in my arms. My younger son Nicholas also earned his Electrical Engineering degree in 2012 and I was the commencement speaker on the stage,” says Dai.

Today, Marvell is well positioned in the burgeoning storage and cloud space. “We have the most diversified product portfolio because we are one company that covers all the way from the storage cloud, networking infrastructure to the mobile side, now the Internet of Things, PC industry and video capability,” says Dai. Google’s Chromecast is powered by Marvell technology for example.

“This is a great example where we collaborate.  Actually this project is dear to my heart because my team worked on this with Google to develop this technology.  Now it’s not only that the technology’s great, but I’m very pleased that between Google and us, we are driving these type of capabilities.  It’s very useful but, at the same time, very affordable. I believe this is how we, as technology companies, need to make an impact for our country.  We want to make a better life for all, so that people can afford it and make their lives more efficient,” says Dai.

The Marvell name is short for marvelous.  “We wanted to be the marvelous company and we were very clear about in order to grow big and be successful long-term, we have to be very thoughtful of the global aspect.  We needed to be able to scale from global and have multiple locations, not just starting in the so-called leading-edge of Silicon Valley. “We are not just a US company, we are a leading global company with 18 R&D centers around the world,” says Dai.

The company is also excited about the introduction of its Kinoma software offering (Kinoma was developed by a company that Marvell bought four years ago).  The software provides a language bridge between any operating system, allowing devices to be OS-independent. “Kinoma brings everybody together seamlessly so you walk into an environment whether or not you are on the Apple OS or the Google or Windows, you can just seamlessly communicate to each other, cross-platform. I feel that we want to make a greater impact to the world and we’ve got to make the software capability available so that it doesn’t matter if it’s my devices or my competition’s devices and if my devices can do better, that’s great.  If certain situations it’s other devices, including my competition, that’s fine, too, as long as we can, together, bring the best solutions, smart solutions to consumers around the world,” says Dai.

“This is just the very beginning for us even though it’s been 20 years. There’s still so much to do and we’re just as passionate and innovative as when we started in 1990. My husband and I, our schedule is no different from a start-up company, around-the-clock, and a little bit off coffee in the morning helps, big-time,’ concludes Dai.