In uncertain times, gold and bitcoin prove their courage 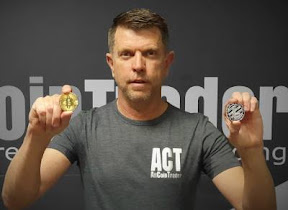 Current economic uncertainty has caused stock markets to experience unprecedented volatility, with many investors looking for safe havens for their funds until the storm caused by the COVID-19 pandemic subsides.

Emerging markets economies have been particularly hard hit as investors retreat to the relative safety of major currencies including the dollar and euro. This has resulted in the rand falling to historic lows against most major currencies.

“However, this is not a new phenomenon and it was only a matter of time before one or the other crisis triggered a significant decline in the currency,” explains AltCoinTrader CEO Richard de Sousa. “The combination of government policy, corruption and aggressive political rhetoric has created a climate of economic uncertainty in the country, and investors are reluctant to take it on.”

The net result of this was a series of downgrades by global rating agencies, with Moody’s and Fitch only recently downgrading the country’s status.

“With all this uncertainty and no solution in sight of the government, South African investors have been looking for a way to cushion themselves against the inevitable depreciation of the Rand, with the most viable options being asset classes that have an international value such as gold and bitcoin,” he explains .

He adds that while other emerging market currencies are likely to rebound from the shock of COVID-19, given the inherent weaknesses in the economy, the rand is unlikely to do so.

Gold and Bitcoin were also not immune to the massive sell-off in mid-March, with the gold price falling by almost $ 200 within a few days. It rebounded quickly and is currently trading around the same level as it was in early March.

“The value of gold as an edge hedge is well known. For investors who want to make sure their investments are protected, they can keep the dollar value of their investments while the marginal value of investments in gold has reached an all-time high. So when equity investments lose value, gold has proven itself, ”comments De Sousa. “The steps taken by central banks to ease monetary policy will only reinforce this trend.”

He adds that those who can are moving their investments overseas, which affects the local economy as there is less capital available to fuel growth and has a negative impact on the fringes, creating a vicious circle leads.

Bitcoin has become known for the past five years as an alternative safe haven from the whims of the global currency markets. There was also a price drop in the middle of last month, but De Sousa says this short-term volatility is something that is inherent in the Bitcoin market.

“Bitcoin has always seen short-term volatility, but in the past five years it has outperformed every other asset class. Those who understand Bitcoin and know how the market moves have a mature point of view and smile on the other end by keeping their Bitcoin holdings despite the volatility. One indication that investors still have confidence in Bitcoin is that trading volumes are higher than usual and we are now seeing an upward trend in price. “

The long-term retention of value of Bitcoin is inextricably linked to the growth of the underlying blockchain technology in business applications. While the hype isn’t at the level of two years ago, there remains a keen interest after De Sousa in harnessing the inherent strengths of the blockchain to drive innovative new business models, especially in applications related to the fourth industrial revolution.

“The other factor remains regulation. As soon as governments begin to effectively regulate the way new stores of value are used, I expect that what was previously viewed as a marginal investment opportunity will crowd out traditional markets, ”he says.