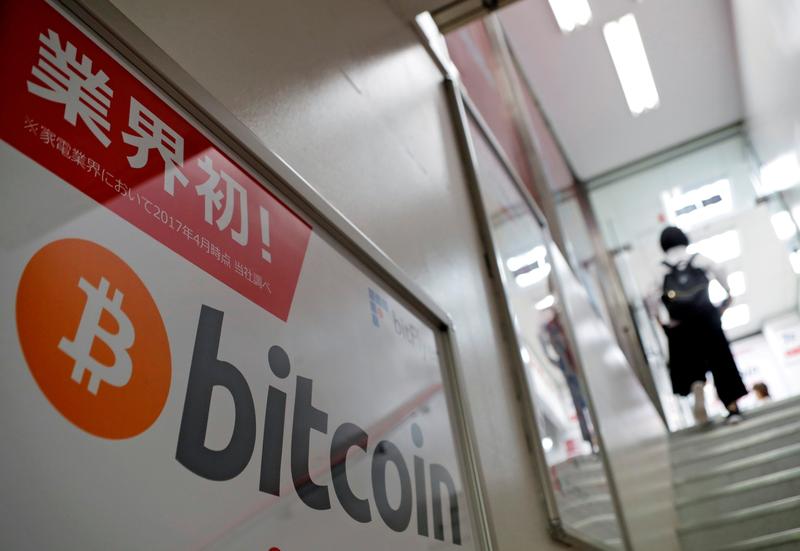 TOKYO (Reuters) – Japan’s army of retail investors who were no stranger to risky bets in the past has become a major force in Bitcoin’s spectacular rally and now accounts for an estimated 30-50 percent of the cryptocurrency trading while it is at record highs.

FILE PHOTO: A logo of Bitcoin is seen on a display of an electronics store in Tokyo, Japan, Sept. 5, 2017. REUTERS / Kim Kyung-Hoon / File Photo

Once skeptical, Japanese retail investors have been drawn to the volatility of the digital currency and the inefficiency in pricing that provides opportunities to make money through arbitrage between exchanges.

“When I first heard about Bitcoin a few years ago, I thought it was a scam,” said Yoshinori Kobayashi, 39, a former stock trader who started trading Bitcoin two and a half years ago.

“But I gave it a try after meeting some people who make money out of it. I bought it for 60,000 yen which quickly became 80,000 yen and I was starting to regret that I hadn’t started earlier, ”said Kobayashi, who believes Bitcoin is in a long uptrend but took some profits last week .

Bitcoin’s spectacular surge, which more than 16-fold this year to over $ 17,000, has drawn comparisons to the gold spike of the 1970s or the rally of Japanese stocks in the go-go era of the 1980s. Both brought massive gains for Japanese retail investors before falling sharply.

Bitcoin and cryptocurrency statistics are patchy as their trading is unregulated in most countries.

According to data compiled by Jpbitcoin.com, a Japanese bitcoin website, yen-based bitcoin trading hit a record 4.51 million bitcoins in November, almost half of the world’s largest exchanges of 9.29 million Bitcoin.

Industry officials say that not all yen-based bitcoin trading is conducted by Japanese retail companies, as some hedge funds are now trading bitcoin in yen to take advantage of price differences between yen and dollar prices.

Still, many industry representatives estimate that Japan accounts for between a third and half of the world’s Bitcoin trade.

South Korea, another major center for bitcoin trading, said it would hold an emergency meeting on Friday to discuss cryptocurrency trading amid calls for tighter regulation.

Japan’s approach to Bitcoin has sparked interest from retail investors.

The Japanese government granted legal status to cryptocurrencies as a means of payment in April and officially recognized 11 exchanges for digital currencies in September.

Also in September, the tax office made it clear that income from Bitcoin is treated as income from which trading losses can be deducted.

This removed concerns that winnings from Bitcoin could be taxed like gambling, where winnings are taxed but losses are not considered a cost.

Some investors, including Kobayashi, also feel connected to Bitcoin, in part because its inventor Satoshi Nakamoto is believed to be Japanese, although the true identity of the father of blockchain technology is shrouded in mystery.

Even with dollar-based exchanges, for example, it’s not uncommon for one exchange to have a price 10 percent higher than another. Then there are often gaps of more than 10 percent between the yen-based Bitcoin price and the dollar-based price.

“Most Japanese traders don’t even bother checking the dollar price,” said a seasoned financial trader who started Bitcoin in September.

The trader also said that Bitcoin’s movements after rising above 100,000 yen ($ 880) are very similar to a major rally in gold and silver in the past.

“Both of them recovered very quickly after breaking out of many years of range-bound trading,” he said.

In fact, many traders say that technical analysis works remarkably well when it comes to Bitcoin. Hiroyuki Kato has been trading cryptocurrencies for two years and spent two to three hours a day studying the patterns and relationships popular in technical analysis on his smartphone or computer terminal.

“I use Bollinger Band, MACD, the stuff everyone knows. It’s easier to win with Bitcoin than forex and stocks, ”said Kato, who quit his sales job at a trading firm about two years ago to focus on trading cryptocurrencies and other assets.

There is increasing talk among some finance professionals that the meteoric rise of Bitcoin resembles the “tulip mania” bubble in the Netherlands in the 17th century, which burst spectacularly. However, many Japanese traders assume that Bitcoin’s stellar run will continue for some time.

“The world’s total financial wealth is around 10 quadrillion yen, and Bitcoin only accounts for about 0.1 percent of that, which seems far too small if we assume the use of Bitcoin spreads,” Kobayashi said.

Kato believes the digital currency is already in a bubble, but continues to expect the start of futures trading on the Chicago Merchantile Exchange next week to attract more funds from institutional investors and keep Bitcoin prices high.

There could be a big outbreak in 2019, Kato says, but not until factors like low interest rates and the deep doubts many people harbor change.

“At the moment, a lot of people are still skeptical about Bitcoins and if many are skeptical, the bubble will not burst.”

(For a graphic on the rapid rise of Bitcoin, click tmsnrt.rs/2AHKJPd)