MassMutual is digging deeper into cryptocurrency with a planned mutual fund for Bitcoin, managed through a technology platform in which the carrier has already invested.

The insurer plans to offer the fund through its broker-dealer MML Investors Services, which works with NYDIG, a bitcoin platform in which MassMutual bought a minority stake of $ 5 million when the airline bought $ 100 million last year invested in bitcoin.

“While MassMutual is looking for ways to integrate cryptocurrencies into different business areas, MMLIS has seen growing demand from our financial experts and their customers for Bitcoin exposure,” said Daken Vanderburg, Head of Investments at MML Investors Services, when announcing the deal. “This offering with NYDIG is another step in expanding our product portfolio to ensure that our financial professionals and clients have the tools they need to continue building broadly diversified portfolios.”

Several insurance companies have invested in Bitcoin, some in funds like Grayscale Bitcoin Trust, but none have been as enthusiastic as MassMutual.

According to a NYDIG survey, many life insurance policyholders are eager for their carriers to increase their cryptocurrency investments and offer options to their customers. The survey was conducted in March of a national sample of 1,050 Americans with an annual income of $ 50,000 or more.

Four out of five respondents expressed an interest in indirect involvement in digital investments.

More than half of the respondents would like to be able to receive all or part of their insurance payouts in Bitcoin. The survey found that 47% of respondents already own digital assets like Bitcoin, and half of those who don’t consider it. Additionally, around 75% expressed at least some interest in learning more about Bitcoin annuities and Bitcoin life insurance.

A third of respondents said they would consider switching to an insurance company that offers Bitcoin products. 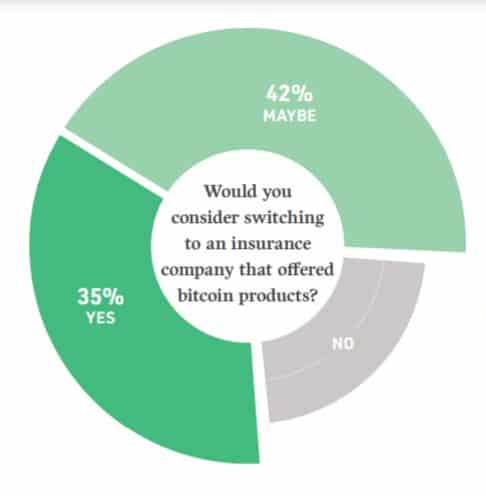 NYDIG has moved into the insurance space, with MassMutual’s investment being just one aspect. Earlier this year, the company hired Matt Carey to focus on “bitcoin-based solutions for US life insurance and pension providers,” the company said. Carey was the co-founder and CEO of Blueprint Income, an online bond marketplace that MassMutual acquired from Stone Ridge, owned by NYDIG.

Also earlier this year, New York Life CEO Ted Mathas joined NYDIG’s board of directors. The operator has also invested in digital assets but has not disclosed how much.

In April, NYDIG announced that it had raised an additional $ 100 million in growth capital from strategic partners including property and casualty insurers Starr Insurance, Liberty Mutual Insurance, and other airlines.

NYDIG is also pulling in some big players on the brokerage side, most notably JP Morgan, whose CEO Jamie Dimon was a high-profile skeptic about digital assets, according to CoinDesk. The company started offering an in-house bitcoin fund to its private banking clients last week.

Steven A. Morelli is an editor at InsuranceNewsNet. He has over 25 years of experience as a reporter and editor for newspapers and magazines. He was also vice president of communications for an insurance agents association. Steve can be reached at [email protected]