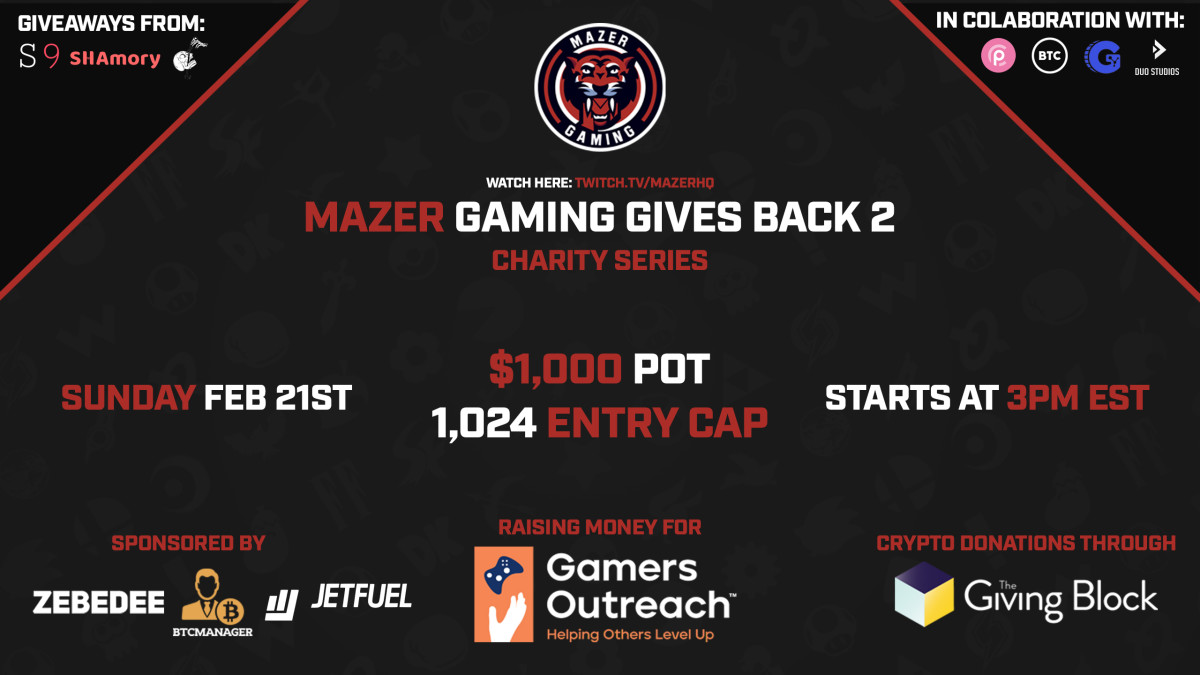 This is a promoted item from Mazer Gaming.

Mazer Gaming, an esports and entertainment organization, has just announced the second edition of its popular Mazer Gaming Gives Back tournament series. Last May, Mazer Gaming, in partnership with The Giving Block, hosted its first ever crypto-infused charity tournament to raise money for Us4Warriors in the form of crypto donations. This event took place on Super Smash Bros., a popular fighting game from Nintendo. It was a huge success, with a total of over 500 high-level players signed up, a total of 50,000 spectators and thousands of dollars raised.

On February 21, 2021, Mazer will partner with a variety of crypto companies to host Mazer Gaming Gives Back 2. The goal of this event is to drive the adoption of Bitcoin across the stream, run freebies, and raise funds for Gamers Outreach. Gamers Outreach is a non-profit organization that provides equipment, technology, and software to help children receive treatment in hospitals. All support crypto donations can be made here.

Zebedee, BTC Manager and Jet Fuel Finance will be the main sponsors of Mazer Gaming Gives Back 2. They will help support a $ 1,000 prize pool for hundreds of “Smash” players to compete on February 21, Grinding Coffee Co., Start9 Labs and SHamory throughout the event to keep viewers enjoying some great fun Win Bitcoin-related prizes! Start9 Labs will also donate their embassy device to the winner of the tournament. Mazer will also be working with PinkCoin, Gather Network, BTC Media (Note: BTC Media is the operator of Bitcoin Magazine) and Duo Studios to put the event together and move it forward. The event will be broadcast live on Mazer Gaming’s Twitch channel. It will have a full production studio with many different commentators and guests on board for this event. Here Christian Moss from Zebedee will speak next to Jack Everitt from THNDR Games about Bitcoin-infused games. The stream begins at 3:00 p.m. EST and will run for hours until a champion is crowned at Mazer Gaming Gives Back 2!

Mazer Gaming is one of the few eSports organizations that are actively involved in the crypto and blockchain space. It has a huge list of sponsors and partners to support its growing endeavors in the industry. What makes this event so great is their willingness to incorporate crypto into their esports events that generate tens of thousands of viewers. It is a firm believer in Bitcoin and crypto and will continue to integrate it through donations, payments, and NFTs. Mazer Gaming is taking all the right steps to drive adoption and education in its industry and we look forward to seeing it make waves in the crypto and gaming space going forward.

For more information about the tournament, see the announcement tweet.
You can find Mazer Gaming on its homepage, on Twitter and on Twitch.

Ethereum holds vital support which could trigger a sharp rally