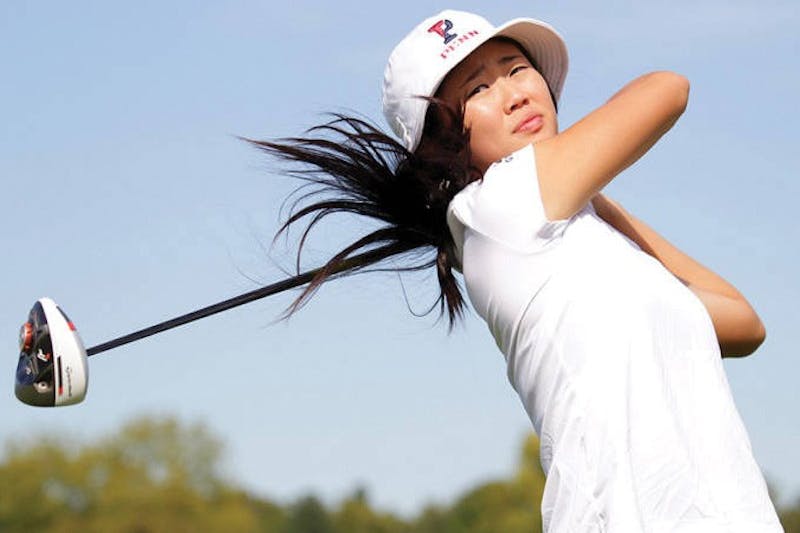 The Daily Pennsylvanian is a student-run nonprofit.

Please support us by disabling your ad blocker on our site.

When they first set foot in University City, many freshmen athletes learn to keep their heads down and work hard in the hopes of receiving just a smidge of playing time by the time they are an upperclassmen. One freshmen golfer, however, has broken that mold.

In just seven short months at Penn, freshman Rachel Dai has made the most of her time competing for the Quakers and has already become one of the best golfers on her team.

Dai’s rapid rise to the top of Penn women’s golf’s lineup has surprised many, as it comes at a time where many other freshmen athletes on the Quakers’ campus are still trying to figure out where they belong.

Success has flowed through the blood of the Georgia native even before she stepped foot on Penn’s campus. Back in high school, Dai won two George State Golf Association individual state titles along with leading Cambridge High School to two team state titles.

The momentum continued once Dai donned the Red and Blue. In her first ever collegiate tournament in September, the freshman shot 230 on the weekend. Her performance was good enough for sixth place in the 63-person field. Dai also helped the Quakers take home the Chesapeake Bay Invitational title.

After finishing the fall semester with a team-leading 77.1 scoring average in the four tournaments, Dai has shown that she is ready to lead this team at the Ivy League Championships at this season’s end.

While Dai’s accomplishments thus far haven’t matched her illustrious pre-Penn career, she also hasn’t yet had the chance to shine on the Ancient Eight stage. If her results thus far are any indication of what’s to come, she is destined to be a breakout star. From helping her team to victories and often times competing for the top individual score at tournaments, the freshman could follow in the steps of Brown sophomore Christine Kim, who won the individual Ivy League title as a freshman in 2015.

The Quakers have come to rely on Dai’s skills, as she has carded the lowest score for the team in four of their six tournaments thus far this season. Both Dai and junior Isabella Rahm have created a two-woman powerhouse that has guided the Red and Blue to some of their best results of the year, including a second place finish at the W&M Kingsmill Intercollegiate Tournament in March and a fifth place performance at the River Landing Classic in April.

This weekend at Brown, Dai’s success is sure to be paramount to the Red and Blue’s final result. If head coach Mark Anderson wants to improve upon his team’s fifth place finish at last year’s Ivy League Championships, the fate of his team may just lie in the hands of this freshman phenom.

Please note All comments are eligible for publication in The Daily Pennsylvanian.

Which crypto will prevail?

NEO: The World Ends With You Secret Reports: How To Find Every Boss Noise And Get The Secret Ending