Report: Bitcoin Adoption In Africa Grows 1,200% In One Year

The continent is the third fastest growing bitcoin economy in the world, powered by retail users looking to save and transfer money.

Bitcoin adoption in Africa has skyrocketed over the past year, increasing by over 1,200%, according to a report by Chainalysis. The increased activity in the region has been fueled by retail investors who are turning to Bitcoin every day for savings, remittances, and peer-to-peer (P2P) trading.

Artur Schaback, COO and co-founder of P2P exchange Paxful, told Chainalysis that its platform has seen strong growth in African countries over the past year, particularly 57% in Nigeria and over 300% in Kenya. In fact, Africa has the largest volume of P2P bitcoin trading in the world as citizens often face banking restrictions on centralized bitcoin entry points.

The ability to buy and trade bitcoin through P2P markets without authorization has also enabled African citizens to bypass government transfer restrictions and move more funds across borders. In 2019, sub-Saharan Africa received at least $ 48 billion in remittances, according to a study by the Brookings Institute.

In addition to remittances, Schaback also stated that Bitcoin enables African merchants to conduct international trade transactions more efficiently. Users resort to P2P markets to buy Bitcoin and pay for the goods they want to import, which is more efficient than using the traditional banking system.

“If you are working with a partner in China to import goods for sale in Nigeria or Kenya, it can be difficult to send enough fiat currency to China to complete your purchases,” said Schaback. “It is often easier to simply buy Bitcoin locally on a P2P exchange and then send it to your partner.”

The final use case driving Bitcoin adoption in Africa relates to hostile economic conditions in the continent’s countries where fiat currency devaluation is often the norm. Paxful’s growth, for example, accelerated in Nigeria last year amid the country’s strong currency depreciation, Schaback said. 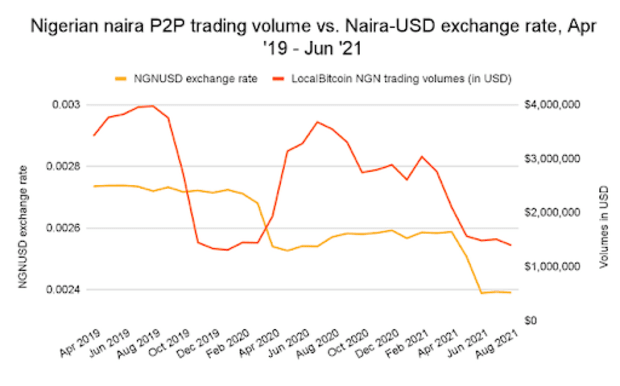 The Nigerian government has attempted to respond to the rising awareness and use of Bitcoin in its territory by announcing plans to develop the e-naira, their central bank digital currency (CBDC). However, according to Adedeji Owobi, CEO of the blockchain consulting firm Convexity, citizens have not shown much interest and could continue to use the vastly superior money that is Bitcoin.

“Last week in a clubhouse room of Nigerian crypto users I asked the group if they would use the e-naira if the central bank introduced it,” Owonibi told Chainalysis. “The overwhelming majority of participants said no because they expect the same instability and management problems to exist with Naira today.”

Bitcoin and Lightning together have the potential to equip not just Africans, but people around the world with healthy money, financial freedom, and individual sovereignty – achievements that would actually undermine CBDCs.