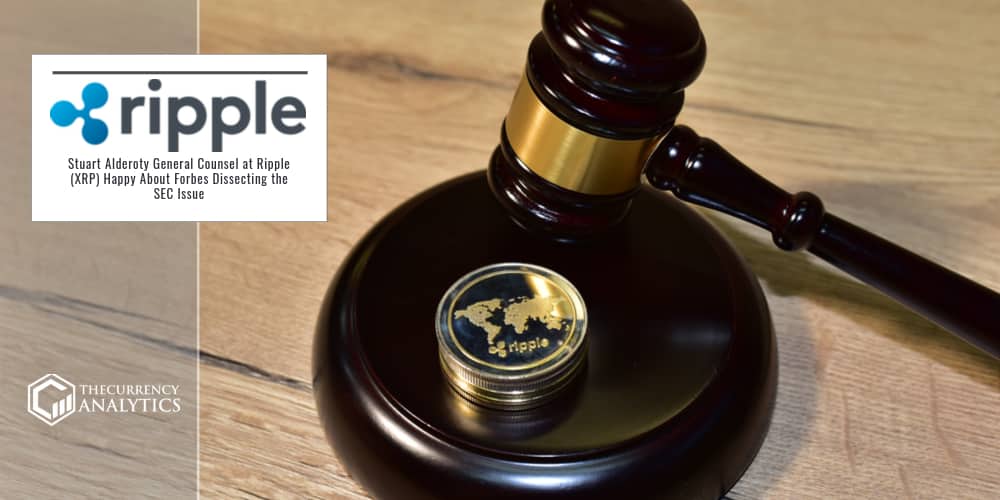 Stuart Alderoty, General Counsel at Ripple, said early on: “It’s not just about the future of the US crypto industry, it’s also about the arrogance of unbridled regulators who make politics through enforcement.”

Roslyn Layton, Senior Contributor at Forbes, published, SEC stumbles in Ripple case, lost in a maze of its own manufacture. Stuart Alderoty recommends that publication be a must.

The Forbes publication analyzes everything from the time of the doubly peculiar lawsuit and again determines how long the SEC waited to file the case. There was also mention of how the filing came about when Jay Clayton, chairman of the SEC, left the chair.

Forbes calls the filing a catastrophic mistake. And several filings from the Ripple side already make it clear that the SEC’s decision to sue Ripple was wrong. It just means that Gary Gensler, the suspected new chairman, has a lot to do.

Jay Clayton’s final act while moving out of the SEC is viewed as an inherently weak decision. Those new to history should read the rest of the facts from the publication: “It started on January 1 when a group of XRP owners led by Rhode Island attorney John E. Deaton hit the agency back. .. ”

The SEC V. Ripple problem has rightly been called the cryptocurrency attempt of the century. The claim itself is very ambiguous because “the SEC complaint alleged that Ripple and its officers were pumping XRP as if they were stocks whose value depends on Ripple’s success as a company, which painstakingly refutes Ripple’s answer.”

Also, Ripple’s two senior executives, Brad Garlinghouse and Chris Larsen, were sued for failing to register XRP as a security in 2013 when they held their currency sales. The SEC again determined that it was not an ICO, but a currency transaction.

Ripple tries to dismiss the lawsuit with the arguments: “Fair termination and due process”. The request for internal SEC documents and communications that could prove the high-profile development at Ripple in connection with XRP by (FOIA) caused the SEC to panic. They are demanding that the “fair notice” defense be repealed!

Now it’s all about to come to the table – the details of the internal work in 2018 to prove that Ether (ETH) is not a security; the list of cryptocurrency exchanges that require the SEC to provide clear guidance on the legal status of XRP prior to listing the token; the details of internal discussions and responses and more.

Why Ethereum indicators are more bullish than Bitcoin’s

Clearing Up Misconceptions: This Is How Tether Should (and Does) Work