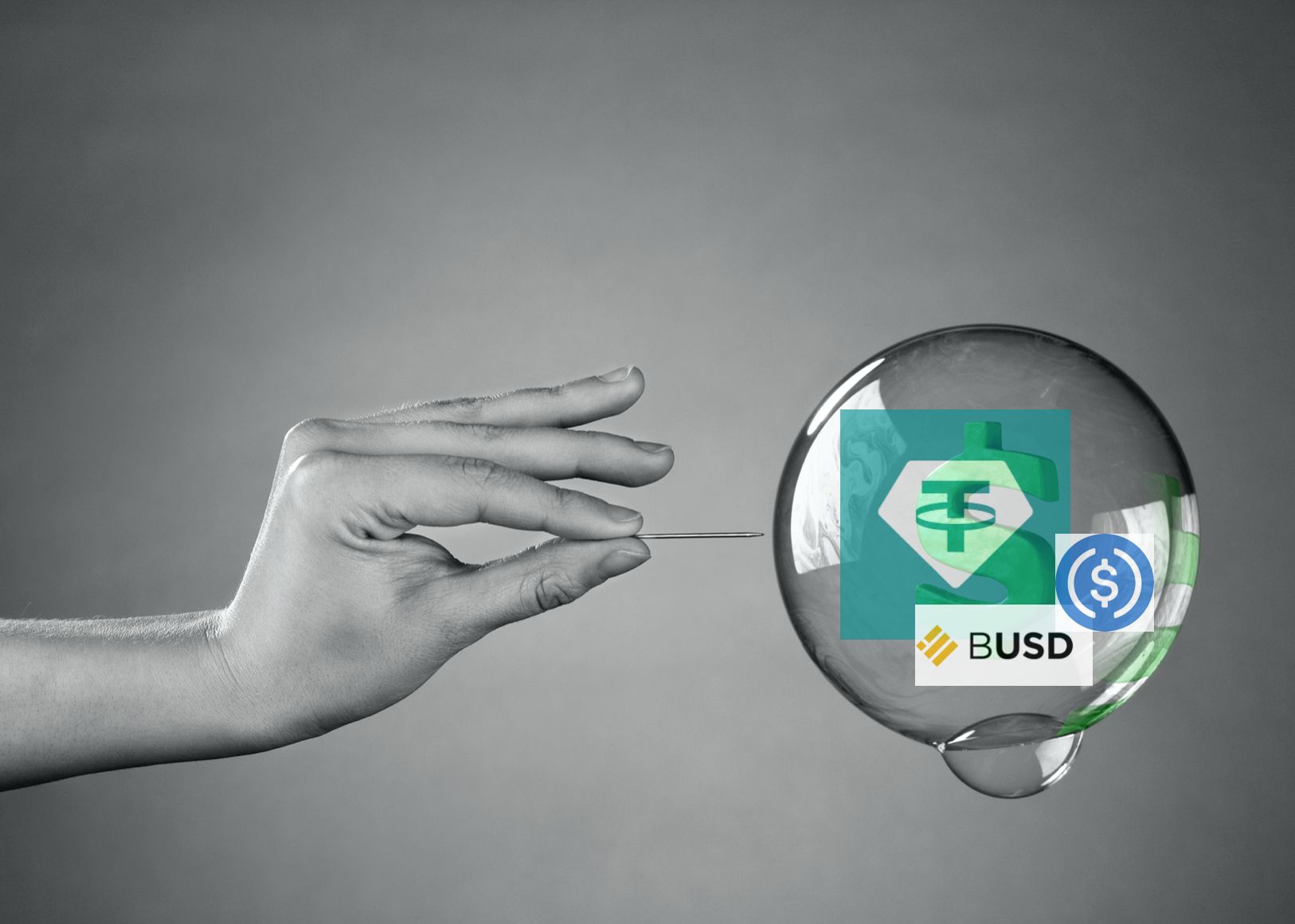 Gennaro is the founder of FourWeekMBA, a leading source on business model innovation.

That is what a crypto enthusiast would tell you about the future prospects of cryptocurrencies.

Yet, as the current scenario shows, cryptos might really be currencies to be used on the moon, if some short-term issues created by stablecoins are not solved for good.

In fact, as stablecoins have taken over the crypto-economy, a critical question to answer is “how much liquidity there is in the system?”

While stablecoins might have been conceived as an “innovation” they might also be posing a threat to the whole crypto ecosystem.

Marketed as the magic pill that can help solve it all as they enable anyone to use them even without having a bank account and as an easy way to transact across the globe.

Stablecoins also make the whole system much more fragile, as they rely often on private organizations that lack transparency, and their balance sheets currently look more like black holes where we don’t know for sure what’s behind.

For the sake of this discussion, when using the term “stablecoin” I’m referring to off-chain.

I explained in the piece about Tether, this type of stablecoins became the trick for cental exchanges to easily move liquidity across currencies (and prevent having to deal with bank accounts shut down). Stablecoins however, also created hidden systemic risks that we’re all bearing as crypto investors.

In fact, while stablecoins solve the liquidity issue for central exchanges, they also externalize the whole hidden risks to the millions of investors in the crypto space.

And if in the short-term it looks like stablecoins are adding value to the system by facilitating (or perhaps inflating) liquidity, they are also favoring massive speculation and a potential breakdown of the whole crypto ecosystem.

In fact, if all this paper castle falls down, who will be left holding the bag? The answer is simple: the millions of retail investors who believed in the potential of crypto (as the whales might be bailed out by central exchanges).

Therefore, we need to make some clarity here if we want to build – in the long-term – a solid crypto ecosystem.

And to do that we need to remove short-term existential threats.

Solving for fake liquidity and externalizing risks to the whole system

The central probrlem with stablecoins is the asymmetry of the underlying system. On the one hand, they are used as the main medium of exchange by some central exchange platforms. On the other hand, though, we do not know how much cash and liquid assets they have.

It’s is true that also the financial system creates wealth by keeping little liquidity aside. However, the same banks that do that (especially after the 2008 financial bubble) have to go through so-called stress tests, and very stringent regulations, in addition to having to make their balance sheets publicly available.

Instead, the incredible “financial innovation” of stablecoins allowed centralized exchanges to print digital money without having to really show the world how those have been backed (some stablecoins are more regulated than others).

In short, they’ve become like black holes, where there is no clue whatsoever of the liquidity available to back them up.

This “financial innovation” is beyond also what Wall Street had managed to create during the 2008 financial bubble. Where financial derivatives with fancy names got repackaged so that they could be taken out of balance sheets, thus escaping regulation.

The paradox is that Bitcoin born as a way to contrast Wall Street, it has become its modern version.

The most interesting features of a crypto-driven world (transparency and openness) have been wiped out by off-chain stablecoins.

So how do we make sense of this puzzle?

Let’s look at the top three stablecoins right now on the crypto exchanges:

Tether was already widely covered here (and I’ll add some key points at the end).

And as we saw in Tether’s case, this was supposed to be a peg with the dollar, and it has really become the most popular way to exchange Bitcoin (indeed most of Bitcoin trade volume might come from Tether).

This means if you want to convert your Bitcoin back to cash, chances are you might need to do it through Tether. And if so, there might be not much to back it up.

Thus, your Bitcoin is not liquid (convertible in real dollars) and therefore it might potentially be worth zero in the short term (unless you were willing to hold it indefinitely).

And if so, this might translate into a domino effect on the whole crypto market (even though some Bitocoiners claim that a collapse of Tether might create an uptake to the Bitcoin price, which to me doesn’t make much sense).

What about the other stablecoins?

USDC is the stablecoin from Coinbase. As explained on the platform:

USD Coin (USDC) is a type of cryptocurrency that is referred to as a stablecoin. You can always redeem 1 USD Coin for US$1.00, giving it a stable price. On Coinbase, eligible customers can earn rewards for every USD Coin they hold.

What are the key components of this stablecoin? As Coinbase explains:

But how do we know that USDC will hold its value? Coinbase further explains in its FAQs that:

Centre, the consortium that mints USDC, collectively holds US$1.00 for every single USDC. These funds are held in a special bank account that is constantly monitored and audited.

Also in this section, Coinbase highlights that the stablecoin advantage is the fact it doesn’t require a bank account. Therefore, it’s borderless and easy to transact in any other coin.

Once again, while stablecoins do try to solve an important issue for central exchanges (stability of the currency and perhaps solving for liquidity) they undermine the whole purpose of a blockchain-based ecosystem. Where there is no central authority minting them and where everything needs to be visible and open to the community.

On June 22, 2021, on the Centre Blog, a grandiose announcement was made that explained USDC had crossed $25 billion in market cap.

How do we know what’s underlying this $25 billion?

Circle and Coinbase posts every month on the Centre website a report. These reports do not tell us anything about the breakdown of its reserves and they are only attested (in short, the accounting firm looks for the congruence of the data and if that is true, but it doesn’t’ “assure” nor “audit”) by accounting services firm Grant Thornton LLP.

It’s important to stress that as an attestation, this doesn’t really address the issue of risk of the USDC’s balance sheets. Instead, it looks for only high-level information.

Such as the size of the issued USDC, and the blacklisted coins. Indeed, in the report for April 2021, we find information about 100,000 USDC blacklisted.

We only know of the blacklisted tokens, as there were requests from law enforcement and therefore a few keys had to be frozen.

There is also a growing number of banned addresses which you can track here.

As in the case of the Coinbase stablecoin, the Binance BUSD is advertised as a 1:1 USD-backed coin which is “highly regulated” (we’ll see what that means):

It was developed in partnership with Paxos (creators of the crypto exchange ItBit and the stablecoin Pax).

In a HEARING BEFORE THE UNITED STATES SENATE COMMITTEE ON BANKING, HOUSING, AND URBAN AFFAIRS, on June 30, 2020, on the topic of “The Digitization of Money and Payments,” Charles Cascarilla, CEO and Co-Founder of Paxos explained:

We believe stablecoins can address the systemic issues that exist in the antiquated plumbing of our financial system. We must update this architecture for a 21st century world where commerce happens in real time; we can no longer rely on a system that is only available for a few hours, five days a week, with long delays. Consumers and institutions alike are held back by the inability to have timely access to their own funds because of settlement delays in bank transfers, international wires and other activities that can take over five days to settle. This makes it difficult to manage other payments with any kind of predictability. On an economy wide scale, this creates a complex daisy chain of loan obligations and unnecessary intermediaries.

By design, blockchain-based stablecoins (like the ones Paxos issues) allow everyone to have equal access to digital wallets and digital dollars, just like with physical cash. The simplest wallets can be set up as easily as email accounts; other than applicable regulatory requirements they do not require extensive paperwork and there is no notion of minimum balances. Stablecoins can build an ecosystem that supports the disadvantaged, reducing disparate impact such as onerous fees imposed by high cost checking accounts, overdraft fees, predatory loans as well as check-cashing and cross-border remittance fees.

Stablecoins are critical for Binance because those act as the medium of exchange to trade on the platform.

Below an interesting table from “What Keeps Stablecoins Stable?” as an overview:

If we go back to the Binance USD, its attestation recalls Paxos.

The monthly attestation report also called “Reserves Account Report” shows us only the balance (the last available is May 2021):

The same report also explains how these reserves might be backed up:

Therefore, the Paxos Standard Token (on which the Binance USD is built ) is claimed to maintain a strictly pegged 1:1 to the U.S. dollar, and its reserves are more regulated.

In addition, in 2020, Coin Metrics had found that the two most active accounts on Paxos were linked to MMM BSC (a well-known Ponzi Scheme company).

What does FDIC-insured mean? What’s the level of liquidity? Does the fact that this stablecoin is “more regulated” means it is also audited more often?

From what we know, we only have monthly attestations that just like other stablecoins only show the total available supply of these tokens.

Ok, fine, but isn’t this just a Bitcoin issue?

If Tether would have been exposed between 2018-2019, this might have saved the crypto economy from a catastrophe, as its scale was still limited.

However, by late 2020 and early 2021 Tether’s market cap exploded. As of now, Tether has taken over the whole ecosystem, and trying to drain an over $60 billion beast sounds like a boa trying to digest an elephant. As highlighted in this Tweet, Tether has also taken over the DeFi space, so this is also an Ethereum problem.

And if the two major cryptocurrencies collapse, guess what would happen to all the others?

We can solve it by switching all liquidity to on-chain stablecoins?

On-chain stablecoins like the Dai (a crypto stablecoin built on Ethereum) are incredibly interesting as their philosophy is aligned to an open and transparent system.

That is in theory. Indeed, Dai itself is collateralized by off-chain stablecoins as explained here and here.

In short, also successful on-chain stablecoins like Dai might not be as safe, given its collaterals, made of USDT and USDC.

What can we do?

It’s very hard to predict what will happen next. And it’s true that Bitcoin has over and over survived existential threats in the last decade. However, paradoxically, at this scale, Tether’s ticking bomb has really the potential to kill Bitcoin, and send the whole crypto space back to Ice Age.

So for all the players in the crypto space, it’s time to quickly pruning the system from Tether and do it now!

by Gennaro @gcuofano. Gennaro is the founder of FourWeekMBA, a leading source on business model innovation. FourWeekMBA

Create your free account to unlock your custom reading experience.

At the latest with Binance: HSBC stops payments as Ripple managers nod in court to receive documents from the exchange