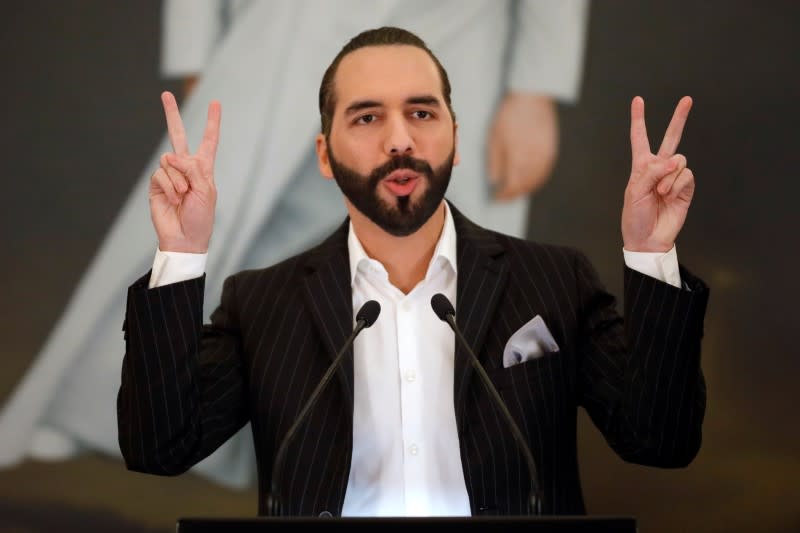 SAN SALVADOR (Reuters) – The young president of the tiny Central American nation of El Salvador rose to global fame this week after his country became the first in the world to adopt Bitcoin as legal tender, but Nayib Bukele is no stranger to controversy.

Cryptocurrency fans around the world celebrated when his bill was swiftly approved by lawmakers on Wednesday and when the 39-year-old leader embarked on a plan to extract energy from volcanoes to power the huge data centers needed to mint digital currency.

The move did not escape the exam. The International Monetary Fund was quick to point out economic and legal risks to the unprecedented use of Bitcoin in the small economy.

From firing officials via Twitter to entering Congress with heavily armed soldiers, Bukele has been prone to ruffling the feathers of the establishment since taking office in 2019.

It won congressional and local elections in February and enjoys over 90% approval, even though the economy contracted 8% last year. His alliance won a historic super majority and crushed the two parties that dominated Salvadoran politics for 30 years.

Just weeks before the introduction of Bitcoin brought him a new international spotlight, Bukele fell out with the Biden administration after the new Congress unceremoniously removed the attorney general and top judges from office.

He says that all of his actions are constitutional and supported by a popular mandate.

The chief prosecutor’s office had investigated government officials. Bukele also closed an anti-corruption office that he opened himself.

Bukele, who calls himself the “coolest president in the world,” recently called an international surfing competition in the country that wears a rear-facing baseball cap and is flanked by a military officer.

His accomplishments include reducing murder rates in a country that has long grappled with deadly gang violence.

Despite his youth, Bukele is not a newcomer to politics.

When he worked for his father’s advertising agency at the beginning of his career, his client was the Farabundo Marti National Liberation Front (FMLN), the left-wing party in power at the time.

He joined the party and became mayor of Nuevo Cuscatlan, a coffee town near San Salvador, in 2012. Away from the media spotlight and with few resources, he published his work on social media. His reputation for good management helped him win the office of mayor of the capital in 2015.

In San Salvador he made himself known for his social and cultural orientation and by donating his salary for scholarships. But two years after he took office, the FMLN expelled him on the grounds that he had sown division, violated party statutes and attacked a trustee with an apple during a council meeting.

He has denied the allegations.

Bukele has teamed up with the right-wing Gran Alianza por la Unidad Nacional (GANA) in his social media-driven election campaign for the presidency. He started a party called New Ideas.

America’s youngest president took office and pledged to end corruption. He himself was investigated by the Attorney General’s office for money laundering, fraud and tax evasion during his tenure as mayor. He has denied the allegations.

The rise of his siblings and cousins ​​to public office or behind-the-scenes advisory roles has also sparked complaints of nepotism, which he has denied.

The international community didn’t pay much attention until the president arrived in Congress early last year to seek approval for a $ 109 million crime-fighting loan – accompanied by soldiers in full riot uniform.

“If I were a dictator or someone who didn’t respect democracy, I would have taken control of the entire government tonight,” Bukele told the Spanish newspaper El Pais.

During the coronavirus pandemic, Bukele enacted a range of health and economic measures to alleviate the crisis, but ignored the Supreme Court rulings of its lockdown measures and faced legal appeals.

“He uses the press and social media to threaten, intimidate and persecute people who might be opponents,” said Jose Miguel Vivanco, America director of Human Rights Watch.

Still, fed up with decades of corruption and ineffectiveness, Salvadorans have admired Bukele’s confident, determined style, including a penchant for using Twitter to give orders to ministers.