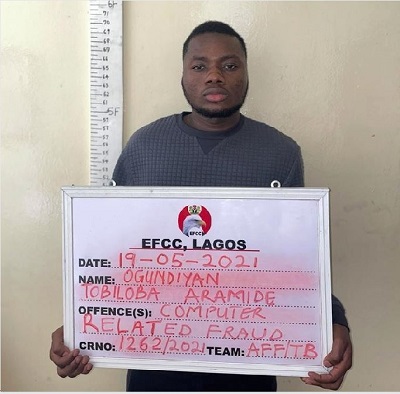 The Lagos Zonal Office of the Economic and Financial Crimes Commission (EFCC) has arrested eight cyber fraudsters, one of whom allegedly tried to use Bitcoin to buy a Sports Utility Vehicle (SUV) valued at N 44 million.

The nation learned that Tobiloba Aramide Ogundiyan was accused by the EFCC Fee Fraud Department of perpetrating online fraud and converting its loot into cryptocurrency.

An EFCC source said Ogundiyan “acquired his ill-gotten fortune through internet fraud, transferred it to a Bitcoin account, and eventually integrated it by contacting a car shop owner in Lekki for a 2018 Range Rover Vela P380 worth N44,000,000 (97,626 USD) to buy in Bitcoin) sometime in March 2021 ”.

Ogundiyan and seven others were arrested on May 18, 2021 at the River View Estate in Lekki, Lagos, by Lagos Commission staff on suspicion of computer fraud.

The suspects are said to have been found with exhibits such as electronic devices (handsets, laptops), exotic cars, expensive jewelry, antiques, etc.

The EFCC said in the course of its investigation that in addition to computer fraud, it found that some of the suspects had completed the three stages of money laundering, ie placement, stratification and integration.

Tether prints money out of nowhere from DailyCoin